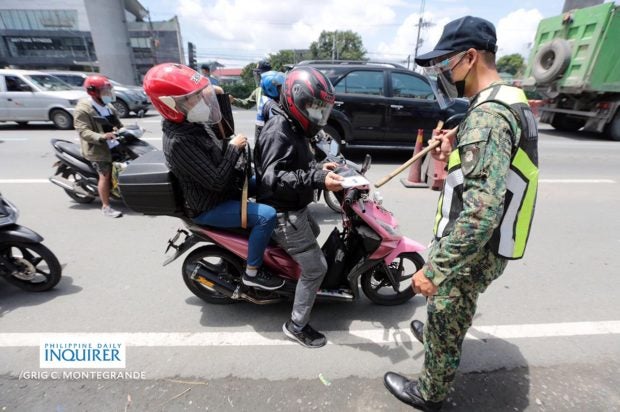 Police officers inspects documents and identification cards of riders at a quarantine control area along Marcos Highway in Marikina City on Friday, August 6, on the first day of the implementation of a two week ECQ of the nation’s capital to prevent the spread of the Delta variant of the coronavirus.-INQUIRER/GRIG C. MONTEGRANDE

MANILA, Philippines — The Philippine National Police has implemented random checking in border control points in Metro Manila to avoid choke points and heavy traffic, according to Gen. Guillermo Eleazar, chief of the PNP.

But Eleazar said on Monday that checkpoints would remain within Metro Manila and at the borders, citing that the police have recorded many violations while the National Capital Region is on enhanced community quarantine (ECQ).

“If there are still many violators, if many still go out of their homes, then we cannot remove the check points,” Eleazar told the Inquirer in a phone interview.

The police chief earlier said the number of quarantine violators during the first day of the implementation of the ECQ have exceeded 20,000, which includes those who claimed to be authorized persons outside of residence (Apor) but were not able to show proof.

To avoid heavy traffic at checkpoints, Eleazar said the police had implemented random checking on individuals entering Metro Manila or crossing other cities within the metropolis.

“We conduct random checking if we see that there is a heavy volume of vehicles that will cause traffic.” he said.

“But if we can check them all, then let’s check them. But random checking remains,” he added.Eleazar pointed out that the number of people going out of their homes and the volume of vehicles at border control points have increased this time compared to the previous lockdowns because more business establishments have been allowed to operate.

“If you look at it, the consumer-Apors have increased because we have more permitted industries this time,” he said.

The PNP on Monday also started the deployment of body-worn cameras to policemen in various border control points in Metro Manila, according to Eleazar.

Eleazar said police manning the checkpoints in Metro Manila had been dealing with a large number of people at checkpoints since the reimposition of ECQ on Aug. 6.

“These body-worn cameras will serve as the constant reminder for them to be courteous at all times and at the same time, their protection against claims and allegations of abuses,” he said.

On Monday morning, Eleazar personally monitored at the command and control center in Camp Crame the live feed from the body cameras worn by the police.

He said the PNP had deployed the body-worn cameras so that the police would get use to the devices.

“Through the real-time videos that are being captured in different borders in Metro Manila, these will help our commanders for any security adjustment,” he said. INQ