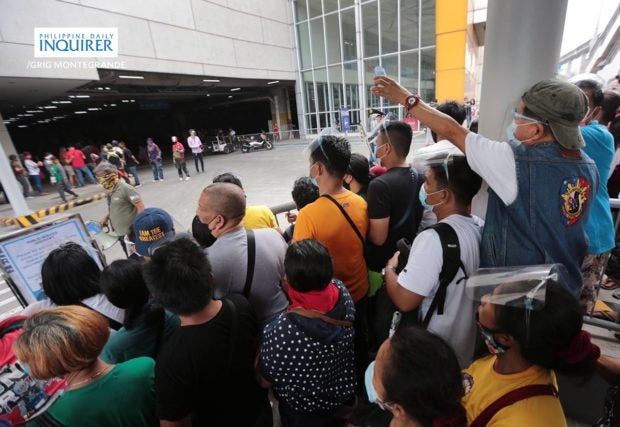 Citizens wanting to get inoculated with COVID-19 vaccine flock to a mall in Antipolo City last August 5, on the eve of the two week lockdown or ECQ which will be imposed by the government from Aug.6-20, to curb the spread of the Delta variant of the coronavirus. Some would-be vaccinees said they went to the vaccination site because of an alleged report that people without vaccines will not be allowed to go out. INQUIRER/GRIG C. MONTEGRANDE

MANILA, Philippines — Five individuals have been charged for supposedly peddling fake news during the COVID-19 pandemic, Malacañang said Monday, warning that the government is serious in going after people behind disinformation.

Citing information from the Philippine National Police (PNP), Roque said five persons were charged for “unlawful use of publication and unlawful utterances” under the Bayanihan to Heal as One Act and for “declaring unlawful rumor-mongering and spreading false information” under the Cybercrime Prevention Act of 2012.

“Well, according to DIDM po ‘no, Directorate for Investigation and Detective Management ng PNP, today po limang kaso laban sa limang tao ang naisampa,” presidential spokesperson Harry Roque said in a press briefing when asked if anyone has been charged for spreading fake news during the pandemic.

(According to the PNP’s Directorate for Investigation and Detective Management, as of today, five cases were filed against five persons.)

(So to people who are spreading fake news, expect that you will be found, charged, and jailed.)

Roque earlier blamed fake news as the reason behind the crowding of people in vaccination sites last week, insisting it was not President Rodrigo Duterte’s warning against unvaccinated persons that led to the exodus.

The Palace official had also dispelled false information that the government would disallow unvaccinated persons from going out and exclude them from the cash aid during the implementation of enhanced community quarantine (ECQ).