Anti-military protests in Myanmar on anniversary of 1988 uprising 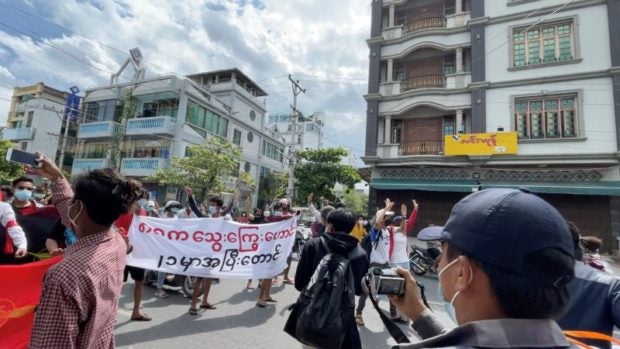 Anti-coup protesters display a banner during a march on the anniversary of a 1988 uprising, in Mandalay, Myanmar August 8, 2021 in this still image obtained by Reuters from a social media video

Protests against Myanmar’s military government broke out across the nation on Sunday, the anniversary of the bloody suppression of a 1988 uprising against a previous army junta.

At least six separate protests were documented on Facebook pages of opponents of the military, which seized power from the elected government six months ago and detained its leader, Nobel laureate Aung San Suu Kyi, and several other key officials.

The Feb. 1 coup ended a brief, decade-long experiment in democracy in the Southeast Asian nation of 53 million, shattering hopes that it would emerge from more than half a century of military rule.

The new government led by Min Aung Hlaing, the military’s most senior general who assumed the post of interim prime minister a week ago, says it acted within the constitution to remove Suu Kyi’s government after disputing the election her party won, though the election commission said the vote was fair.

Many of Sunday’s protests made reference to the “8-8-88” democracy uprising on August, 8, 1988, which the then-military regime crushed. Opponents of the military say an estimated 3,000 people were killed during that crackdown.

“The old debt from 88, we must get it all in this 21,” chanted protesters in Wundwin township in Mandalay region, recorded on Facebook videos.

Another anti-protest in Myaing township featured placards reading: “Let’s struggle together toward the unfinished 8.8.88 people’s liberation.”

A military government spokesman could not be reached on Sunday for comment on the protests.

The 1988 uprising was at the time the biggest challenge to army rule that had last since 1962.

Min Aung Hlaing on Sunday released a statement praising another anniversary – the founding of the Association of Southeast Asian Nations (Asean) 54 years ago.

The statement did not mention the special ASEAN envoy ton Myanmar that the 10-member regional bloc appointed in recent days, who has been tasked with ending post-coup violence and fostering talks between the military and its opponents.

The new envoy, Brunei diplomat Erywan Yusof, said on Saturday he should be given full access to all parties when he visits Myanmar, a trip that has not yet been scheduled.