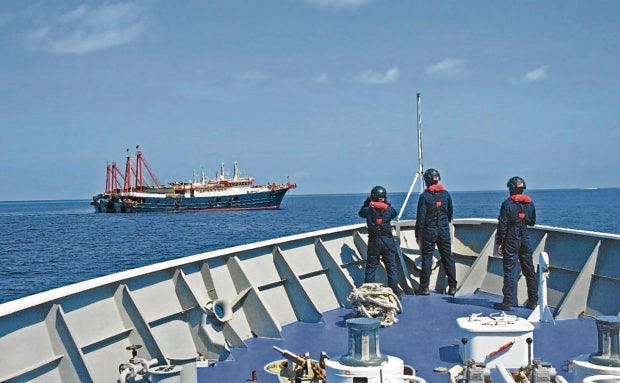 MANILA, Philippines — It’s certainly no mean feat to assert the country’s sovereign rights over the West Philippine Sea without resorting to war.

“That’s a calculated risk,” said Philippine Coast Guard (PCG) Probationary Ensign Gretch Mary Acuario, whose voice—smooth yet capable of assuming a commanding tone—resonated across the sea when she endeavored to drive away foreign vessels in a series of radio challenges.

“This is Philippine Coast Guard BRP Cabra. You are within [the] Philippine exclusive economic zone. You are requested to provide the following: name of vessel, intention, last and next port of call,” Acuario, on orders of her commanding officer, Lieutenant Commander Erwin Tolentino, said over the radio after spotting seven Chinese militia vessels around Sabina Shoal, 248 kilometers west of Palawan province, on April 27.

Two months later, on June 30, the 29-year-old ensign found herself in a similarly tense situation, as she communicated the same stern message to five Chinese and two Vietnamese fishing vessels near Marie Louise Bank, 272.24 km northwest of Palawan.

As with the incident in April, she received no response from the foreign vessels, but they left immediately when the BRP Cabra, together with boats sent by the Bureau of Fisheries and Aquatic Resources, moved to approach them.

The PCG drew praise for its response to the encroachment of foreign ships, with Acuario in particular earning the admiration of many Filipinos.

Soon enough, the Coast Guard recognized the potential of tapping the women among its personnel in the fulfillment of its mandate to safeguard the country’s waters.

It initiated an “Angels of the Sea” training program for its women staff, who would thereafter be assigned onboard PCG vessels to carry out the special mission of “communicating with foreign ships so as not to elevate tension” in Philippine waters.

An initial group of 81 PCG women went through that program, which continues to be improved and now includes a language course on Mandarin.

“We want our ‘Angels of the Sea’ to become the voice of peaceful and rules-based order at sea, especially in our country’s sensitive maritime frontiers,” Vice Adm. Leopoldo Laroya, PCG deputy commandant for operations, said in a statement.

BRP Cabra’s patrol is also part of Task Force Pagsasanay, which the Coast Guard formed on April 6 for capacity building of its personnel and assets in monitoring activities in the West Philippine Sea.

Acuario, who is also a lawyer, said it is part of her job “to provide legal advice to the commanding officer of the PCG vessel in ensuring that the activities conducted do not lead to an escalation of the situation in the disputed areas, and that our actions are compliant with the rules on the use of force and other relevant laws.”

A graduate of the Polytechnic University of the Philippines, Acuario passed the Bar exams last year. But apart from becoming a lawyer, it has always been her dream to be part of the uniformed service, she said.

She describes herself as patriotic, adventurous and goal-oriented, and said she volunteered to be part of the task force despite being aware of the pressure on this group amid the continuing tensions in the West Philippine Sea.

Probably no one sensed any tension in her voice when she spoke on the radio, but Acuario admitted that “I still feel nervous every time, you wouldn’t know how they (the foreign vessels) would react to the radio challenge. It’s still a risk.”

“If [our] actions will affect the whole nation, as well as its relationship with other countries, yes, there’s really a lot of pressure [in the work that we do],” she said.

Acuario said praying calmed her and helped her fulfill her tasks.

To de-stress, she also spends her free time watching K-dramas.

As perhaps expected, the Angels of the Sea program also drew criticism, specifically from party list group Gabriela, which said that it “trivializes” the maritime dispute as it becomes more tense and complicated.

“It’s infuriating how the government continuously shrugs off the intensifying foreign military operations in our very own territory,” Gabriela Rep. Arlene Brosas said in a statement last month.

She also noted that the Coast Guard’s tack provided no solution “so long as President Duterte treats the 2016 arbitral ruling against China as a piece of paper.”

The program is “a futile attempt to mask the sexist and misogynistic nature of the Duterte government,” Brosas said further.

But Rear Adm. Ronnie Gil Gavan, who initiated the training program, said it was conceptualized precisely to help sustain women’s empowerment in the Coast Guard service.

Acuario herself defended the program, saying “Please do mind that being an Angel of the Sea is just part of our job; we are also performing other duties. And they do not know how it really feels to be out there.”

“After the radio challenge, I was so happy that we at PCG were able to do our job. I’m proud to be part of the [PCG] and to be a Filipino,” she said.

“At PCG, both men and women are given equal opportunities at work and to serve the nation,” said Dela Rama, who added that she draws inspiration from Acuario, because her “authoritative voice showed that a female voice was effective in defusing a possible standoff.”

“I know our role would be challenging given the big responsibility we have. But I couldn’t be any prouder to be part of the PCG and the Angels of the Sea,” Dela Rama said.

Dela Cruz said: “To be part of the Angels of the Sea is a good opportunity. I feel proud that out of the more than 2,000 PCG women, I was among the first batch who will have the chance to be the voice of the Philippines, defending our sovereignty through radio communication.”

A 30-year-old nursing graduate, Dela Cruz has been assigned onboard a PCG ship but has yet to be deployed in the West Philippine Sea.

“I’m looking forward to that but I have to admit that I also feel nervous,” she said. “So I’m taking it as something positive. Besides, I know that if I get into in an actual situation onboard, I have the support of the [Coast Guard].”

Why did she take part in this mission? “Para sa bayan (for the country),” Dela Cruz said.