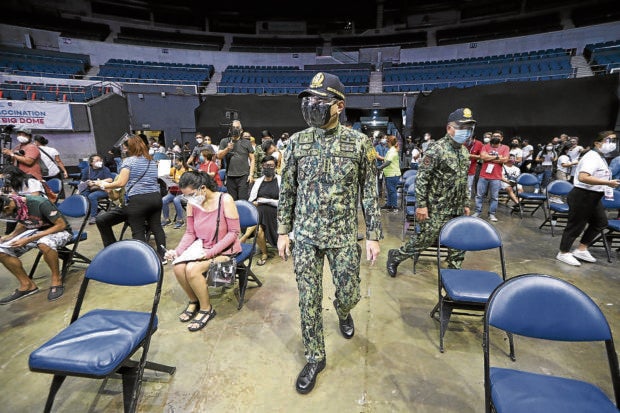 MANILA, Philippines — The Department of Labor and Employment (DOLE) should investigate companies that illegally insist on “no vaccine, no work” for their employees and job seekers despite the official prohibition against such policy.

The militant labor group Kilusang Mayo Uno (KMU) urged DOLE’s action after receiving complaints through its workers’ hotline (09202586121) that some companies were discriminating against unvaccinated workers.

It cited a complaint claiming that a private utility corporation had told its employees that they could not report to work without proof of COVID-19 vaccination. KMU did not identify the company.

It added that the complainant-workers asked not to divulge the names of the companies for now.

But the labor group said they would collate all the complaints and would file with DOLE a formal complaint that would name the companies.

Many private companies, however, are discouraging unvaccinated employees from physically reporting to their offices and just work from home whenever possible. This was meant to protect those who have yet to be inoculated and to prevent the spread of the virus in the workplace.

KMU also said that more than a dozen job seekers who have completed their requirements were abruptly turned away by a manpower agency when the workers were unable to present vaccination cards.

Another manpower agency had issued an advisory to employees and applicants that was tantamount to “coerced vaccination,” KMU said.

“We are reminding companies that vaccination is voluntary. It cannot be used to discriminate or remove a worker from work,” said KMU secretary general Jerome Adonis.

He said the government’s slow COVID-19 vaccination drive was adding to workers’ woes.

“Even if a worker has decided to get vaccinated, it takes so long (to get an appointment) or sometimes there is no vaccine supply,” Adonis said.

After the official COVID-19 vaccination rollout last March, Dole warned employers against firing or discriminating against workers who would refuse to get vaccinated.

It said employers should only encourage their workers to get vaccinated. Employers also could not pass on the cost of any company vaccination program to the workers.

“Any employee who refuses or fails to be vaccinated shall not be discriminated against in terms of tenure, promotion, training, pay, and other benefits or terminated from employment. ‘No vaccine, no work’ policy shall not be allowed,” Labor Secretary Silvestre Bello III said earlier.

Last Aug. 5, the Department of Health (DOH) reiterated that the “no vaccine, no work” policy was not allowed after crowds rushed to vaccination sites in Metro Manila due to rumors that unvaccinated persons would not be entitled to government cash assistance or permitted to report to work during the lockdown.

It also pointed out that Republic Act No. 11525 on the COVID-19 vaccination program “states that vaccine cards shall not be considered an additional requirement for employment purposes.”

Sergio Ortiz-Luis Jr., president of the Employers Confederation of the Philippines (ECOP), said in a phone interview on Sunday that the business group did not subscribe to the “no vaccine, no work” policy, which was already prohibited by the government.

“If ever we have a member company doing that, certainly we will tell them [not to do it]. We will try to police our ranks. I am not aware (of any member who) does it,” he told the Inquirer.

“What we do is we blame it to the hesitancy to be vaccinated, but the problem is that we don’t have [enough] vaccines. That’s why there’s chaos for those who do want to get vaccinated,” he added.

When sought for comment, Trade Secretary Ramon Lopez said: “Companies cannot have a ‘No vaccine, no work policy.’’’

“Basically because we have yet to have a high [vaccination] rate and reach a point when vaccine supply is greater than demand (or those that must be vaccinated).”

The labor department earlier had to issue the same clarification after the national government began rolling out last June the program to immunize 35.5 million people belonging to the A4 category.

The COVID-19 task force simplified the A4 criteria to include private-sector workers who needed to be physically present in their workplace; employees in government agencies and instrumentalities, including government-owned and -controlled corporations and local government units; informal sector workers and self-employed individuals who work outside their homes as well as those working in private households. This led to rumors that people in this category who would not get vaccinated would not be allowed to work.

Developed countries like France have started restricting the movement of their unvaccinated citizens because of their refusal to be inoculated. In the case of the Philippines, many people wanted to be vaccinated, but supply has remained tight.