A drought-hit California town finds itself sinking into the ground 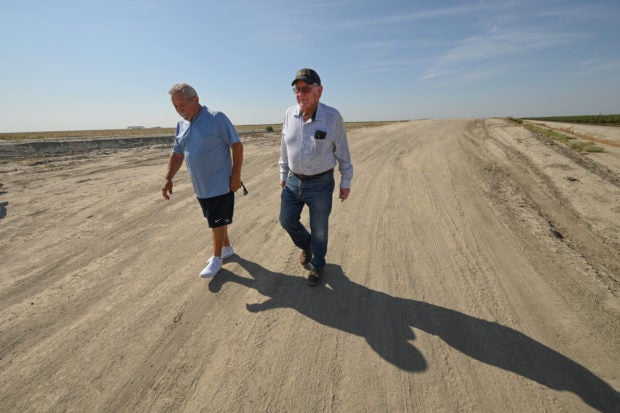 CORCORAN, United States — “You’ve got too many farmers pumping all around,” complained Raul Atilano. This octogenarian resident of Corcoran, the self-proclaimed farming capital of California, was struggling to make sense of the strangest of phenomena: his already suffering town is sinking, ever so gradually, into the ground.

A constant stream of trucks carrying tomatoes, alfalfa or cotton outside this town of 20,000 shows just how inextricably Corcoran’s fate is tied to the intensive farming practiced here.

To irrigate its vast fields and help feed America, farm operators began in the last century to pump water from underground sources, so much so that the ground has begun to sink — imagine a series of giant straws sucking up groundwater faster than rain can replenish it, as hydrologist Anne Senter explained it to AFP.

Strangely, signs of this subsidence are nearly invisible to the human eye. There are no cracks in the walls of the typical American shops in the town’s center, nor crevices opening up in the streets or fields: to measure subsidence, Californian authorities had to turn to NASA, which used satellites to analyze the geological change.

And yet, over the past 100 years, Corcoran has sunken “the equivalent of a two-story house,” Jeanine Jones, a manager with the California Department of Water Resources, told AFP.

The phenomenon “can be a threat to infrastructure, groundwater wells, levees, aqueducts,” she said.

The one recognizable sign of this dangerous change is a levee on the edge of the city, in an area where wisps of cotton blow in the air. In 2017, the authorities launched a major project to raise the levee, for fear that the city, which sits in a basin, could be flooded … whenever the rains finally return.

This year, however, the problem has been not floods but an alarming drought aggravated by climate change.

It has transformed this food-basket of America into a vast field of brown dust, forcing the authorities to impose water-use restrictions on farmers.

So Corcoran now finds itself in the midst of a vicious circle: with their water supplies limited, farm operators are forced to pump more underground water, which in turn speeds the sinking of the town.

Few locals have spoken out against the problem — not surprising, since most of them work for the same big agribusinesses pumping up groundwater.

“They are afraid that if they speak against them, they might lose their job,” said Atilano. He spent years working for one of the country’s biggest cotton producers, J.G. Boswell, whose name is seen on thousands of cloth bags stuffed with cotton that are seen stacked around town. 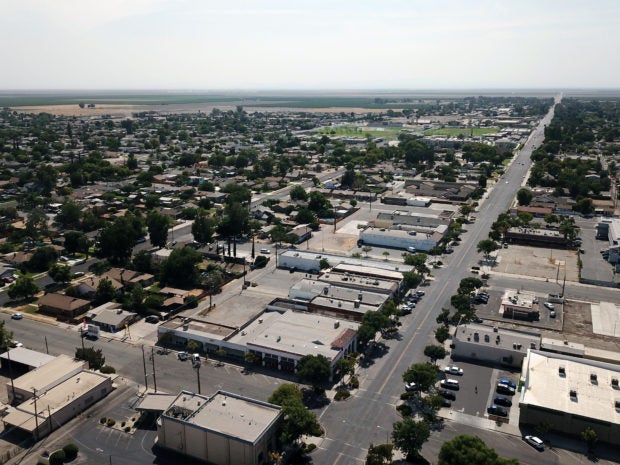 Aerial views of the Central Valley farming town of Corcoran, California which is sinking due to the pumping of ground water, July 24, 2021. AFP

As big farm operations have increasingly become mechanized and industrialized, requiring less and less local labor, the town’s inhabitants themselves have been sinking — into a debilitating economic and psychological slump.

One-third of the majority Hispanic population here now lives in poverty. The three movie theaters that once brought life to the town have all closed their doors.

“A lot of people are moving out,” said local resident Raul Gomez, who is 77.

On this summer afternoon, under a crushing heat wave, some people have stopped to chat under an enormous wall painting.

It depicts a clear blue lake surrounded by snow-capped mountain peaks — for now, a distant dream.