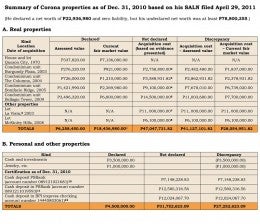 MANILA, Philippines—No amount of “auditing trickery or legal acrobatics” can sweep under the rug the P55,863,374 discrepancy in real property, cash and investments that Chief Justice Renato Corona did not declare in his 2010 statement of assets, liabilities and net worth (SALN),  Akbayan Rep. Walden Bello said Thursday.

“There are now at least 55 million reasons for the Senate impeachment court to convict Corona on charges of doctoring his SALN and even without the court opening his dollar accounts,” he told the Inquirer.

Bello said the P55.8 million represented the discrepancy between the P22,936,980 in net worth declared by Corona in his 2010 SALN as filed on

He said Corona’s “true but hidden net worth” could be culled “even by a fourth-grader doing basic arithmetic” based on the figures and testimony made before the Senate impeachment court by various registers of deeds, bank officials and condominium developers.

Aurora Representative Juan Edgardo Angara, prosecution spokesperson, said that by looking at the evidence presented at the impeachment court, it would seem that Corona had indeed more than P50 million in undeclared assets based on his declarations in his SALN, peso bank accounts and real estate transactions.

“Given his background working as a bank lawyer, justice and in a big auditing and accounting firm, it is hard to believe that such discrepancies are a product of errors or oversight,” Angara told the Inquirer.

“One cannot help but conclude that there was a pattern of nondisclosure of assets over the years,” he said.

Angara said that based on the testimony of Internal Revenue Commissioner Kim Henares, the increase in value of Corona’s assets was unsupported by the Chief Justice’s legitimate income.

Bello said Corona’s “true worth” of P78.8 million was really too much for a Chief Justice to earn.

“That’s the kind of net worth that you expect from somebody in business. That should not be the amount that should be earned by a Chief Justice,” Bello said.

Bello said that a table of the discrepancies between Corona’s declared net worth and his true net worth would show how House prosecutors have already proven Corona’s guilt “without an iota of doubt.”

The P78.8 million is the sum of the P47.05 million in total acquisition cost of Corona’s properties and his total peso deposits of P31.75 million with PSBank and Bank of the Philippine Islands (BPI) as of end 2010, Bello said.

Neither did Corona declare in his 2010 SALN ownership of a lot in La Vista, Quezon City, which was acquired in 2003 for P11 million and another lot in McKinley Hills in Taguig, acquired in 2008 for P6.1 million.

“While Corona only declared P3.5 million in total deposits for 2010 with both banks, testimonies by officials of PSBank showed that for the year he actually had P7,148,238.83 in one account in PSBank and P12,580,316 in another account with the same bank,” Bello said.

“And if that’s not enough to show that Corona has been hiding millions of pesos through our banks, a testimony by a BPI officer showed he also had a total deposit of P12,024,067.70 with the bank at end of 2010,” he said.

Bello said Corona only declared the P6.8-million fair market value of the Bellagio penthouse which he and his wife Cristina acquired for P14.5 million from Megaworld at an “unbelievable and unheard of” discount of P10 million.

Bello doubted whether Corona could still wiggle out of his hole given the evidence.

“That Corona only declared a fair market value of P2,369,980 for his unit at Bonifacio Ridge despite his acquisition of the same for the princely sum of P9,100,000 shows his criminal tendency to undervalue his properties,” he said.

“Why? For the simple reason that he cannot justify the acquisition of high-priced properties on a justice’s salary. He just had to undervalue these because the stiff acquisition cost elicits the conclusion that he had amassed ill-gotten wealth,” the lawmaker added.