Go: Only Duterte as my VP will make me run for president in 2022 | Inquirer News
Close
menu
search

Go: Only Duterte as my VP will make me run for president in 2022 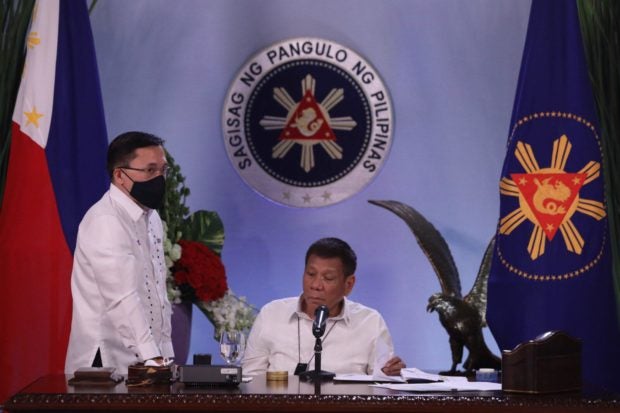 MANILA, Philippines — Senator Bong Go on Friday said that he will only join the presidential race in 2022 if President Rodrigo Duterte will be his running mate.

Go made the comment following the move of PDP-Laban’s national executive council to endorse the Go-Duterte tandem for the 2022 elections.

“As I have said many times before, I leave my fate to God, to the Dutertes (kay Pangulong Rodrigo Duterte at Mayor Sara Duterte)—kung ano man po ang kanilang magiging desisyon sa pulitika—and to the Filipino people to whom I owe this opportunity to serve our country,” Go, Duterte’s long-time aide, said in a statement.

(As I have said many times before, I leave my fate to God, to the Dutertes (to Pangulong Rodrigo Duterte at Mayor Sara Duterte)—whatever their political plans may be—and to the Filipino people whom I owe this opportunity to serve our country.)

(The only thing that will make me change my mind about running for president is if Tatay Digon is my vice president. Because I know that will be the real ‘continuity.’)

The national executive council of PDP-Laban endorsed through a resolution the tandem of Go and Duterte for 2022, a pair that was the “popular” and “logical” choice for the party, according to PDP-Laban Secretary General Melvin Matibag.

Matibag, a member of the council, is still subject to a vote during the party’s national convention on September 8.

Go thanked PDP-Laban for supporting him, but reiterated that he is not interested in talking about politics now amid the pandemic.

(When the right time comes, consider me last. Whatever position is available, then that’s the one for me. Becaise for me,  only destiny can tell.)

Read Next
2 brothers killed by train while mourning another brother struck at same spot
EDITORS' PICK
Duterte praises military but slams police for poor discipline, corruption
COVID-19 cases surging in all regions and provinces, says DOH
Acer starts the year off strong with the Aspire Vero National Geographic Edition
DOH: Too early to say COVID-19 cases are declining
The best of bayside and city living at SMDC’s Sail Residences
Over 3 Million worth of prizes to be won at Smart Padala’s SENDali Manalo Promo!
MOST READ
PBA gets crucial call from GAB for go signal under different setup as reboot of Governors’ Cup could come earlier
Marcos Jr. visits Cebu, stands as ‘ninong’ to mayor’s son
Djokovic has to comply with rules to go to Spain, PM says
Comelec is confident candidates will join debates, says spox
Don't miss out on the latest news and information.