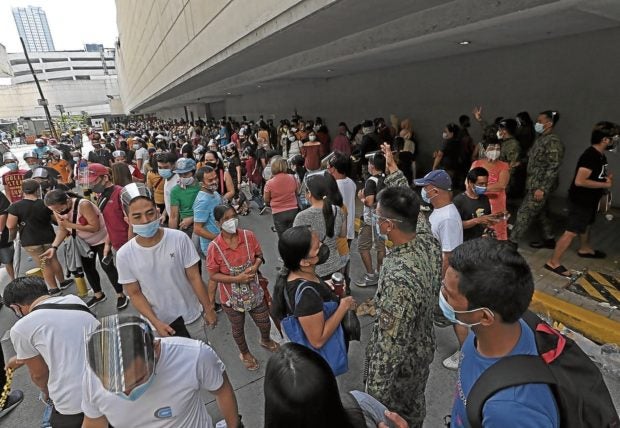 People hoping to be vaccinated gather outside the inoculation venue in a Manila mall. RICHARD REYES/FILE PHOTO

MANILA, Philippines — The government is currently investigating what it suspected was an attempt to “sabotage” the COVID-19 vaccination program by causing multitudes of individuals to storm to vaccination sites in a rush to get inoculated.

Interior Undersecretary Jonathan Malaya on Friday said the National Bureau of Investigation and the Philippine National Police (PNP) are currently tracing the source of false information that they claim led to the exodus of individuals to vaccination sites, particularly the rumors that people will not be able to receive financial aid and would not be allowed to go out if they are unvaccinated.

Law enforcement agencies will likewise look into reports that loads of people coming from outside of Metro Manila were escorted in buses and vans to vaccination sites in the metropolis to get inoculated.

Malaya said they will determine whether these are organized and deliberate to “sabotage” the vaccination program, not only of local government units (LGUs) but also of the national government’s.

(We fear that this is an organized effort by someone to sabotage the vaccination program.)

“We are taking this very seriously because this is a serious threat not only to public health but also to our national security,” he added.

For his part, National Task Force against COVID-19 deputy chief implementer Vince Dizon said the task force is also looking into reports of an attempt of sabotage the vaccination drive.

(We have received an unverified report, which we need to investigate, that there are bad people who deliberately sabotaged vaccination sites since people arrived there in buses and in vans.)

Dizon also called on the public not to readily believe in rumors and verify information that they hear to avoid repeating the incident.

(We are calling on the public not to believe fake news spurred by not-so-good people who only want chaos and undermine the government’s vaccination program.)

Metro Manila residents reportedly stormed to vaccination sites on Thursday, ahead of the reimposed enhanced community quarantine (ECQ) over the region, with Manila City recording at least 19,000 individuals in their vaccination sites.

Malacañang had denied that the panic-vaccination that occurred stemmed from President Rodrigo Duterte’s recent pronouncement that unvaccinated people will be barred from going out of their homes, otherwise they’d be escorted home by the police.

The Palace attributed the panic to fake news.