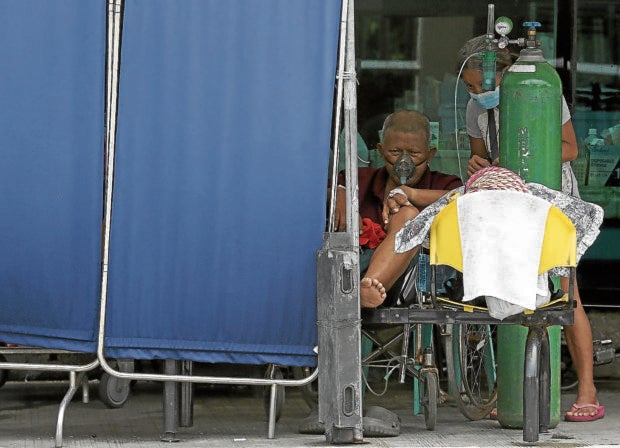 OVERCROWDED A patient waits at an observation tent of Sta. Ana Hospital in Manila as hospital capacity hits critical levels due to an increase in COVID-19 cases in the National Capital Region. —RICHARD A. REYES

As the National Capital Region (NCR) and nearby provinces begin a two-week lockdown today, 12 of the 22 major hospitals in Metro Manila are already at critical risk in terms of their ICU capacity.

The list was based on the monitoring of the Metropolitan Manila Development Authority (MMDA) and was presented by its chair, Benhur Abalos, in a recent meeting with NCR mayors and business leaders.

In an Aug. 2 memorandum to all NCR hospitals, the Department of Health (DOH) ordered the conversion of some of their facilities to accommodate new cases and to increase their COVID-dedicated beds by 50 percent.

It also ordered the safeguarding of health-care workers through alternate staffing and hiring additional manpower for a backup pool of hospital workers.

The One Hospital Command Center (OHCC) hotline also recorded a 400-percent jump in calls so far this month, indicating the rising number of COVID-19 infections.

The OHCC is an inter-agency project led by the DOH and the Inter-Agency Task Force for the Management of Emerging Infectious Diseases (IATF) to ensure an efficient health facility referral system in Metro Manila.

In an online press briefing on Thursday, OHCC operations manager Dr. Bernadett Velasco said they received an average of 600 calls a day in the past three days, a four-fold increase from the June average of 120 calls. It was also double the 300 calls received each day by the hotline in July, she said.

Of those who reached out to the OHCC, about 40 percent were referred to hospitals, another 48 percent to isolation centers and temporary treatment and monitoring facilities, while the rest involved consultations and inquiries, according to Health Undersecretary and treatment czar Leopoldo Vega.

Most calls to the 24-hour hotline came from Metro Manila, Calabarzon and Central Luzon.

Velasco also said during the briefing that the OHCC came up with a surge capacity plan after it noticed the increasing trend in the volume of calls the hotline received in recent days.

In a separate bulletin, the health department, along with the University of the Philippines-Philippine Genome Center (UP-PGC), announced that the country’s genomic surveillance effort detected an additional 116 cases of the more transmissible Delta variant of COVID-19, thought to be fueling the surge in infections in the country.

Of the 116 new cases, 82 percent or 95 were local cases. One was a returning overseas Filipino, and the DOH said it was still trying to determine the travel history of the remaining 20 cases.

Majority or 83 of the local cases have indicated addresses in the NCR, while three were from Calabarzon. Four cases have addresses in Central Visayas, two in Davao Region, and one each in the Zamboanga Peninsula, Cagayan Valley and Ilocos Region.

The 116 newly detected Delta cases have been tagged as recovered, the DOH said. The latest round of whole genome sequencing brought the country’s total tally of Delta variant cases to 331.

However, the UP-PGC was able to sequence less than 1 percent of all COVID-19 cases in the country, indicating that the occurrence of the Delta variant in the country could be higher.