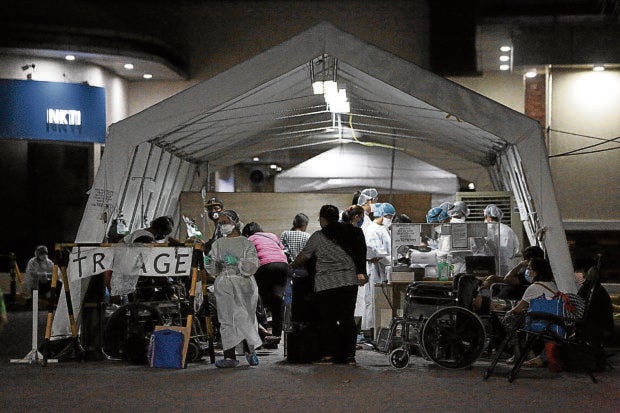 A makeshift triage was built at the NKTI to cater to a surge in coronavirus cases last April 2021. INQUIRER FILE PHOTO

MANILA, Philippines — Calls being received by the One Hospital Command Center (OHCC), the country’s hospital referral system, has increased to around 600 in the past three days in August, the operations manager of the OHCC said Thursday.

OHCC Operations Manager Dr. Bernadett Velasco said that the center was only receiving 100 to 120 calls per day in June and around 300 per day in July.

“For the last three days, ang average natin ay nasa 600 (we received an average of 600 calls),” she told an online media forum.

According to Velasco, the OHCC received 730 calls only on Wednesday, of which 16 were “unanswered.”

(Basically, that’s what we can handle inside the command center. That is how huge the difference is because before, we were only receiving 100 to 120 calls, but right now we are receiving around 700 calls per day.)

“This is the census yesterday. Noong isang araw, nasa 600 plus tayo (Yesterday, we received more than 600 calls). Unanswered calls were just at 20,” she added.

According to Velasco, the calls received were mostly from Metro Manila, Calabarzon, and Central Luzon.

In an interview with DZBB on Sunday, treatment czar Leopoldo Vega said that calls at the OHCC have increased to 175 to 180 calls per day in the last two weeks as COVID-19 cases also increase. He said that in the first week of July, there was only an average of 90 to 110 calls.

Velasco explained that Vega may be referring to the number of clients attended to at the command center.

“I think the one mentioned by Usec. Vega is the number of clients or the events that we created. This is aside from the number of incoming calls that we are still receiving,” she clarified.

“Meron kasing clients that they have multiple requests and multiple times silang tatawag pero it’s just created into one event. So multiple ‘yung needs nila, pero created as one lang kaya lumiliit siya on the reported na events,” she added.

The OHCC was created by virtue of Section 7 of the Republic Act No. 11494 or the Bayanihan to Recover as One Act, which states that there shall be a COVID-19 national referral system to provide patients a fast and efficient way to locate and avail of services from health facilities.

The Department of Health also issued Department Order No. 2020-0653, which states that a One Hospital Command System should facilitate coordination between health facilities and healthcare provider networks as well as streamline the referral and transfer of COVID-19 cases.