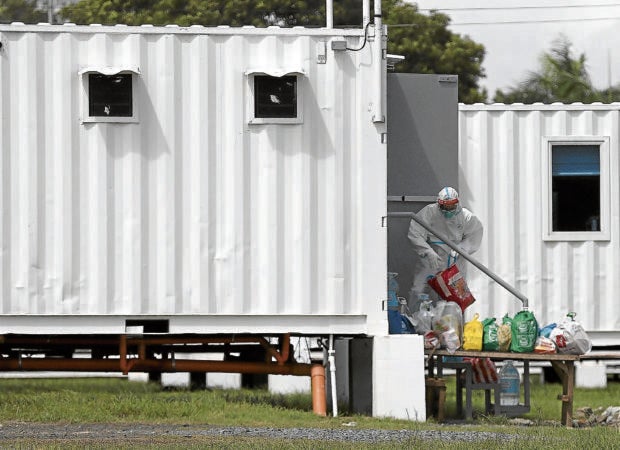 SUPPLY RUN A health worker collects food, bottles of drinking water and other essentials sent by relatives of patients undergoing treatment at the Manila COVID-19 Field Hospital in Rizal Park. A table is set up in the area where supplies are left as part of health and safety protocols. The field hospital’s capacity has hit 83 percent, with 284 of 344 beds now occupied. —RICHARD A. REYES

MANILA, Philippines — Private businesses are willing to share a portion of their company-procured AstraZeneca vaccines to help the government in its plan to administer four million vaccine doses in Metro Manila during the two-week hard lockdown which begins on Friday.

The number of doses to be donated was still being discussed with the National Task Force Against COVID-19 (NTF), but Go Negosyo senior adviser Josephine Romero said the private sector wants to augment the vaccines allocated by the government for the National Capital Region (NCR) during the two weeks when it reverts to enhanced community quarantine (ECQ) to prevent the surge of the more dangerous Delta variant.

She also said private companies agreed to give vaccines to local governments outside NCR that were experiencing a surge in infections.

“I know you got these vaccines that you’ve ordered for the businesses. Please help us here in Metro Manila,” Metropolitan Manila Development Authority (MMDA) Chair Benhur Abalos appealed to the business community during a Go Negosyo town hall forum on Wednesday.

Abalos said the goal is to cover 45 percent of NCR’s total population of 14 million during ECQ.

Abalos also requested Presidential Adviser for Entrepreneurship Joey Concepcion, Go Negosyo founder, to lend personnel to man the vaccination sites and a team to become mobile inoculators during the lockdown.

In July, 1.1 million AstraZeneca doses, out of the 17 million doses procured by the private sector under a tripartite agreement with the national government and the vaccine manufacturer, were delivered.

The Metro Manila mayors agreed to go on a two-week hard lockdown on a condition that the national government would allocate four million vaccine doses.

Concepcion said they initially pushed only for a smaller-scale lockdown but was convinced to a hard Metro Manila quarantine after seeing the number of COVID-19 cases rise.

“It’s against our DNA to shut our own businesses… it may be tough but I think you and I made the right decision (to temporarily shut the industry). The numbers (of COVID cases) point to the same direction,” Concepcion said.

From the current daily rate of 107,000 jabs administered in NCR, this would have to be doubled to 250,000 doses administered during the two-week period, Abalos said.

NTF deputy chief implementer Vince Dizon, speaking at the Laging Handa briefing on Wednesday, said the Inter-Agency Task Force for the Management of Emerging Infectious Diseases (IATF) had given assurance that NCR would get four million doses while 2.5 million doses would be given to other areas under ECQ.

On Tuesday, Dizon said 164,000 doses were administered in NCR. He said if Metro Manila would top its record of 190,000 doses administered for one day, the target to inoculate two million people could be achieved.

But Vice President Leni Robredo called on the government to ramp up vaccinations to 750,000 a day and COVID-19 testing to 120,000 a day if it really wanted the new ECQ to be the “last ever’’ to be imposed.

“To achieve that, we need to stop looking at lockdown measures as stopgap measures only,” she said in a two-minute video reiterating her previous recommendations. “This will not work if all other pandemic measures remain under status quo.”

At the Go Negosyo forum, epidemiologist Dr. John Wong asked Metro mayors to focus on vaccinating those 50 years old and above who are at the highest risk of hospitalization and death due to the Delta variant.

Senior Citizens Rep. Rodolfo Ordanes wants all fully vaccinated individuals to be considered authorized persons outside of residence so they could commute to and from areas under strict lockdown.

Another 90 individuals also succumbed to the disease, bringing the total fatality count up to 28,231.