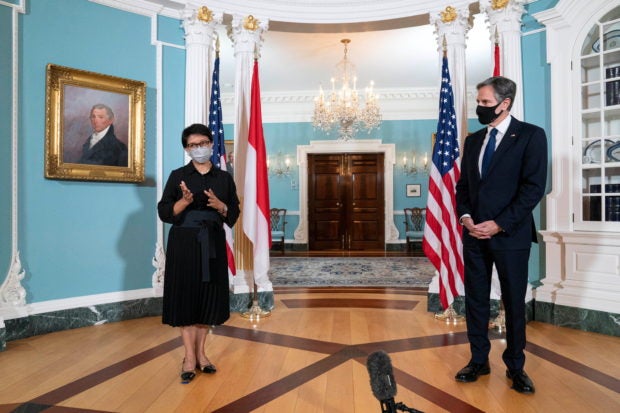 U.S. Secretary of State Antony Blinken listens as Indonesian Foreign Minister Retno Marsudi talks to members of the media after a bilateral meeting at Department of State in Washington, U.S., August 3, 2021. Jose Luis Magana/Pool via REUTERS

WASHINGTON — U.S. Secretary of State Antony Blinken announced on Tuesday the launch of a “strategic dialogue” with Indonesia, and Washington said the two countries committed to working together on issues that include defending freedom of navigation in the South China Sea.

Meeting in Washington, Blinken and Indonesian Foreign Minster Retno Marsudi also committed to work together against COVID-19 and the climate crisis and to boost bilateral trade and economic ties, the State Department said.

Indonesia is the largest country and economy in the 10-member Association of Southeast Asian Nations (ASEAN), a bloc Washington sees as key to its efforts to stand up to China’s growing influence in Asia.

The two sides agreed to establish a “strategic partnership” in 2015, but Blinken told reporters while standing alongside Marsudi that the dialogue was only now actually being initiated.

“Indonesia is a strong democratic partner to the United States; we are working together on so many different fronts,” he said, adding that Washington appreciated Jakarta’s strong voice within ASEAN.

Marsudi told Blinken a strong partnership with Indonesia would be “a key asset for your increasing engagement in the region.”

She said the United States was one of the important partners for ASEAN in implementing its Indo-Pacific outlook.

“It is my hope, and the Indonesian government’s, to advance the bilateral relationship with the U.S., from health to SDGs, from education, to economy, and beyond,” she said, using the acronym for sustainable development goals.

A State Department statement on the meeting said the two discussed steps for pandemic recovery. Blinken noted Washington had donated 8 million vaccine doses to Indonesia, and the countries were also working together on oxygen and therapeutics.

Marsudi and Blinken also “expressed shared views on maritime security” and committed to “defending freedom of navigation in the South China Sea, and continuing collaboration in cybersecurity and preventing cybercrime,” the statement said.

It said Blinken commended Indonesia’s efforts to support Afghanistan’s peace negotiations and stressed the importance of restoring ASEAN member Myanmar to the path to democracy.

On climate, the two sides “discussed opportunities for Indonesia to raise its climate ambition,” it said, without elaborating.

The talks came before Blinken was to participate in a virtual meeting with ASEAN, several members of which have competing claims in the South China Sea to those of China. Beijing sees nearly all the strategic waterway as its own and has built up its forces there.

Blinken is joining a week of meetings with regional counterparts, part of a U.S. effort to show it is serious about engaging with Southeast Asia to push back against China.

Murray Hiebert, a Southeast Asia expert at Washington’s Center for Strategic and International Studies, said there had been little time to develop the strategic partnership agreement reached under the Obama administration before former President Donald Trump took office.

“Agreements like this weren’t a priority for his administration,” he said of a deal stretching into multiple domains, including defense, energy and broader economic ties.

“Hammering out details in all these areas will take some time and require considerable focus by senior foreign policy, defense and economic officials.”