Police officer killed in exchange of gunfire outside Pentagon 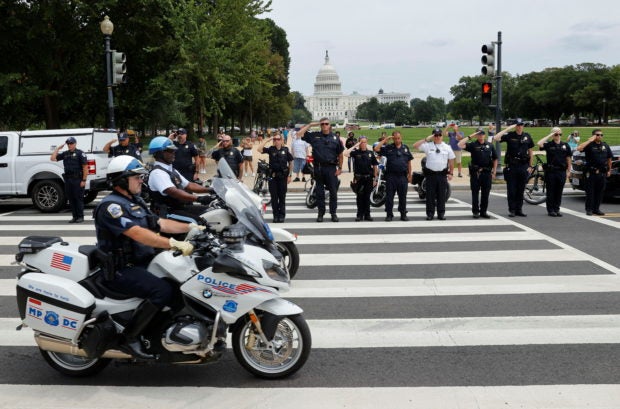 Motorcycle officers from Washington’s Metropolitan Police Department pass saluting officers from the U.S. Capitol Police, the Pentagon Force Protection Agency and other police departments as a ceremonial procession in honor of the police officer wounded in a shooting at the Pentagon earlier in the day drives past the U.S. Capitol in Washington, August 3, 2021. REUTERS/Jim Bourg

WASHINGTON — A police officer protecting the Pentagon was killed outside the building in Arlington, Virginia, on Tuesday, U.S. Senator Mark Warner said.

Chief Woodrow Kusse, head of the Pentagon Force Protection Agency, said there were multiple injuries in an exchange of gunfire at a public bus stop but declined to say if anyone was killed.

Kusse declined to speculate on the motive or to say whether the assailant was in custody but added that authorities were not actively looking for one.

He said the FBI was assisting in the investigation.

Warner said he was saddened to learn about a Pentagon police officer being killed on Tuesday “in a senseless act of violence.”

The building was briefly put on lockdown as police responded to the incident.