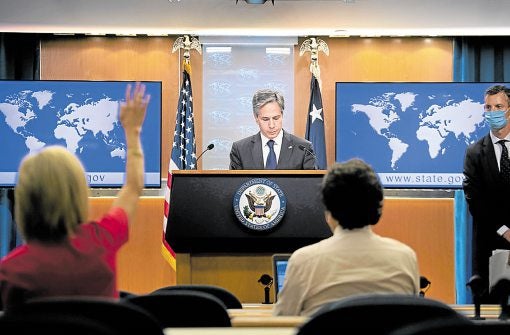 TOUGH TASK: Eleven Democrat senators have pressed US Secretary of State Antony Blinken, here taking questions at the US state department in Washington on Monday, to condemn human rights abuses in the Philippines. (REUTERS)

MANILA, Philippines — In yet another defense of his administration’s bloody campaign that continues to be the target of criticism, President Rodrigo Duterte said the war on drugs had benefited the Filipino people while putting him and his family at constant risk of retaliation.

Delivering an expletive-laced public address on Monday, Duterte also warned the US Department of State to be “careful” about what it was planning to do, and claimed that America had its share of human rights violations.

He congratulated government agencies for their drug busts that, he said, netted large hauls. He said his campaign against illegal drugs, which rights advocates here and abroad call out for the killings and abuses done in its name, had been good for the country.

“Let us say that what the human rights [groups] are saying is true. Son of a whore, who benefited from that? Me? Did I benefit from it? Did my family benefit from the son of a whore killings? Who benefited? You, your children, our country benefited,” the president said.

In contrast, he said, he and his family were put at risk because drug players were expected to retaliate for his actions.

“I am not a millionaire who has a squad guarding my back. I am the one facing a problem now,” he said.

The Commission on Human Rights (CHR) bristled at Duterte’s claim that the five-year-old war on drugs had benefited Filipinos, saying it was “presumptuous” and “corrosive” of the rule of law and democratic norms.

“To say that … the killings result in benefits is, to my mind, presumptuous because while there is in the law what are called justifiable killings or deaths, the law provides standards for that: self-defense, among others,” CHR Chair Chito Gascon said on Tuesday in an interview.

Gascon noted that through the years under the antidrug campaign, self-defense had taken on a markedly different meaning, with law enforcers invoking resistance to arrest (“nanlaban”) to justify the killings resulting from police operations.

“But ‘nanlaban’ in and of itself cannot be said to be justified deaths because we need to make sure that in each and every instance, the law was complied with,” Gascon said.

“If it was not complied with, then this undermines our rule of law. How exactly will undermining our rule of law redound to the benefit of society?” he said.

‘Over my dead body’

The US state department had earlier observed that impunity remained a problem in the Philippines, taking note of reports that “government security agencies and their informal allies committed arbitrary or unlawful killings” in carrying out the war on drugs.

Said Mr. Duterte: “I’d like to say something about the state department. Be careful. Be careful of what you are planning or doing there because you yourself, your country, is guilty also of so many violations of human rights.”

He said he would not allow himself while he lived to face any international investigation — an apparent reference to the complaint filed against him at the International Criminal Court (ICC) for the killings under the war on drugs.

“It’s over my dead body. You can take me, bring me to the Netherlands as a dead man. You will have a carcass. I will never go there alive, you fools,” he said.

Before stepping down from her post as ICC special prosecutor, Fatou Bensouda had requested the tribunal to open a formal inquiry into the extrajudicial killings.

Bensouda said she had found basis to believe that the crime against humanity of murder “was committed as part of a widespread and systematic attack directed against a civilian population pursuant to or in furtherance of a state policy.”

Human Rights Watch senior researcher Carlos Conde said the president’s claim of a bloody but beneficial antidrug campaign “essentially passes the buck” to the public, through the insinuation that it was the Filipino people who “made him do all these killings because that’s supposedly what they wanted.”

“It’s not only disingenuous. It’s also a cowardly attempt to evade responsibility for his murderous actions, “ Conde said.

Conde also said the president’s latest rhetoric against drug users was part of his populist strategy to make “perfect Duterte bogeymen” out of them.

Backers of the antidrug campaign believe that the supposed tradeoffs — security, lower crime rates — outweigh any need for scrutiny of its conduct.

The CHR’s Gascon said Duterte’s claim “suggests that deaths or killings create a benefit to society as a whole.”

“I guess what he is suggesting is deaths to alleged criminals — drug users, drug traffickers,” Gascon said.

He added that the President’s rhetoric had a “corrosive character of enabling and empowering violence that goes beyond the law, and that’s what we have to guard against.”