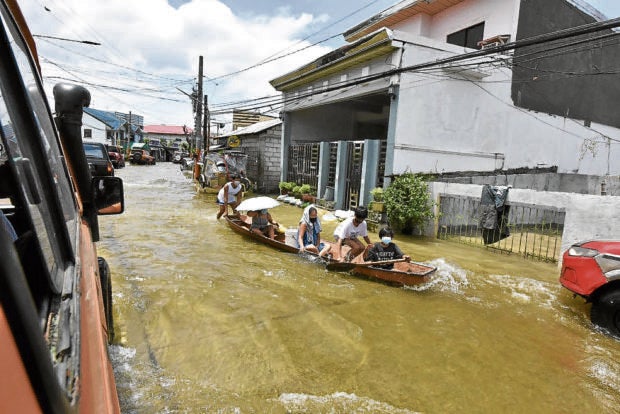 VILLAGE RIDE In this photo taken on Monday, residents of Barangay Poblacion in Masantol, Pampanga, use a wooden boat to get around the village as floodwater continues to swamp low-lying areas. —PHOTO COURTESY OF PAMPANGA PROVINCIAL INFORMATION OFFICE

As of Tuesday, Pampanga province had 119 flooded villages; Zambales, 12; Bulacan, 5; and Bataan, 3, according to the latest report of the Regional Disaster Risk Reduction and Management Council (RDRRMC).

The following areas were declared under state of calamity due to severe flooding: City of Balanga and Hermosa, and Dinalupihan towns in Bataan; Masantol and Macabebe towns in Pampanga; and Calumpit town in Bulacan.

At least 500 families, or 1,700 people, in Bulacan were still in evacuation centers due to the widespread flooding that hit 10 towns and cities. They came from low-lying villages of Hagonoy, Pulilan, Calumpit, Paombong, Bulakan, City of Malolos, Guiguinto, Bocaue, Balagtas and Obando.

Damage to roads and crops in Bulacan reached P170 million.

The heavy downpour also raised the elevation at Angat Dam to an average of half a meter daily since July 19. The latest dam elevation was 192.90 meters above sea level on Monday.

Tulfo turned down offer to be Pacquiao’s VP