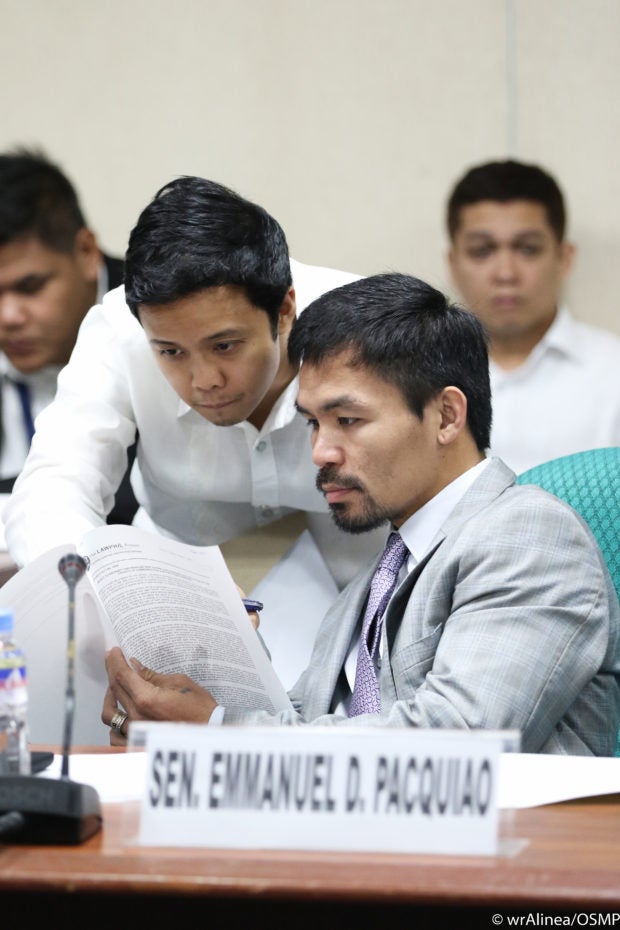 Amidst his training for his upcoming fight with unified welterweight champion Errol Spence Jr. in the United States, the eight-time world division boxing champ-turned-legislator was also waging a war against social media trolls that linked him in the alleged anomalous multi-billion-peso sports complex project in Sarangani.

Pacquaio said he is determined to hold the social media trolls accountable for spreading lies about him, hoping that this would empower more Filipinos to rise up against the irresponsible and reckless use of social media.

“Many of these SocMed trolls are making a lot of money at the expense of honest and hard-working citizens. I’ll make it my mission to stop them at all costs,” Pacquiao said.

Through his legal team from the Cuison, Daguinod, Mendoza-Martelino Law offices, Pacquiao has requested the help of the PNP Anti-Cyber Crime Group to identify the owners and administrators of 27 social media platforms that carried or shared the alleged fake news that linked him to corruption.

Pacquiao’s action stemmed from a social media post made by President Rodrigo Duterte’s spiritual adviser, Pastor Quiboloy of SMNI who claimed that the senator was behind the unfinished Sarangani Sports Complex that eventually became a “white elephant.”

Quibuloy also claimed that the project had cost the government P3.5 billion, even showing pictures of dilapidated bleachers and overgrown grass.

The post of Quibuloy was quickly shared and discussed by various social media trolls that include self-confessed Duterte die-hard loyalist Bryan Cristobal, who is better known as Banat By on at least 27 internet sites, according to Pacquiao’s camp.

“The post is libelous and was malicious to destroy the good reputation of the Senator. For the benefit of the public, I would like to remind everyone the Senate is part of the legislative branch of government. Their role is primarily to create bills and resolutions which may become laws later on. It is because of this that the Senator being a strong advocate for sports development proposed the creation of a world-class sports complex in Sarangani to further develop athletes in the region. He proposed this in 2018 and it was signed into law by President Rodrigo Duterte on February 22, 2019,”  said lawyer Atty. Pelagio Lawrence Cuison.

“The full implementation of the project will be done by the local government through the province of Sarangani and the municipality of Alabel where the land is located, while the budget will be coming from the National Government. After the proposal of the bill and its signing into law by the President, Senator Pacquiao has no direct dealings with the project. The contractor selected by the bidding committee of the province also has no relation to the Senator,” he added.

He said that the construction of the Sarangani Sports Complex was made possible with the enactment of Republic  11224 (An Act  Establishing the Sarangani Sports Training Center) which Pacquiao authored but its allocation was not fully realized since the budget has to be realigned for COVID-19 response.

“The obviously malicious intent of these fake news outlets is to smear the good name of the Senator should not go unpunished and should be prosecuted to the full extent of the law,” Cuison said.

Read Next
Duterte hopes to ‘entice’ vaccine-hesitant Filipinos with US-made vaccines
EDITORS' PICK
Writers’ groups join outcry over KWF move
Powered by style, innovation and passion
Authors unbowed after gov’t ‘purge’ of books
House energy committee chair Arroyo bats for cheap electricity
Taiwan’s foreign ministry thanks U.S. for maintaining security in Taiwan Strait
A laptop that maximizes your WiFi so you can maximize your productivity
MOST READ
Arjo Atayde reveals proposal to Maine Mendoza was ‘more than a year’ in the making
‘FPJ’s Ang Probinsyano’ officially ends after nearly 7 years
Angelica Panganiban, Camille Prats recall ‘trauma’ of being called out for weight gain in ‘G-mik’
Most wanted person in Cebu arrested — PNP
Don't miss out on the latest news and information.