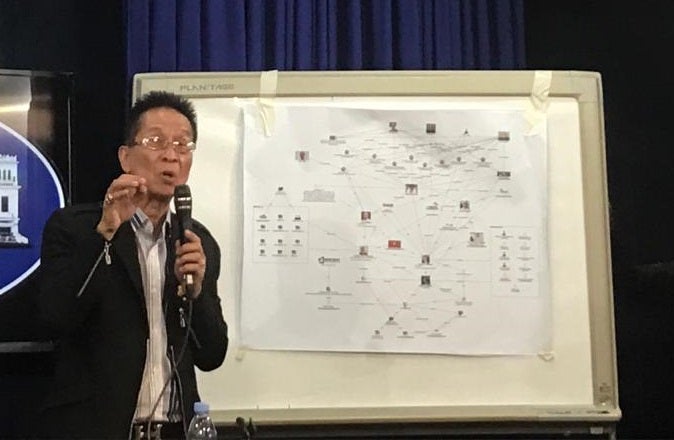 Presidential Spokesperson Salvador Panelo presents to media on Wednesday, May 8, 2019, a new matrix supposedly showing people and parties involved in a conspiracy to discredit the administration of President Rodrigo Duterte and boost the candidacy of opposition candidates. INQUIRER.NET / NESTOR CORRALES

( This story was published on May 10, 2019 in INQUIRER.net and written by Nestor Corrales in which Presidential Spokesperson Salvador Panelo said he did not link Olympic weightlifting medalist Hidilyn Diaz to the anti-Duterte plot. He blamed the media for their “wrong interpretation” of the diagram.)

MANILA, Philippines — Malacañang on Friday (May 10,2019) blamed the media for their “wrong analysis” of the alleged oust-Duterte diagram in which athlete turned-TV host Gretchen Ho and Filipino Olympian Hidilyn Diaz were named.

Two days after he presented the “Oust Duterte” matrices that revealed Ho and Diaz as among the planners, Panelo made a statement about who should be held accountable.

“It is unfortunate that some media outfits have put a spin on the Oust Duterte Matrix by instantly assuming and zeroing in on the supposed inclusion or participation of certain personalities namely, Gretchen Ho and Hidilyn Diaz, whose names this representation never mentioned during last Wednesday’s (May 8) press briefing as being part of the ouster plot against our beloved President,” Panelo said in a statement.

During the Palace briefing on Wednesday,  Panelo presented a diagram with Ho and Diaz’s names on it. He said he had been instructed by the President “to present this and it’s coming from him.”

“The issue at hand is a Powerpoint slide, entitled “Rodel Jayme of Metro Balita,” showing the registered Facebook account or profile of Rodel Jayme. Just by the obvious title of the slide, one can deduce that the subject of its concern is the person of Mr. Jayme. The diagram contained in said slide includes other accounts Mr. Jayme is actively following, to visualize his character, as well his political and social interests. It is in this context that the names of Mses. Ho and Diaz appeared,” he said.

“The subject slide which was flashed onto a screen during the press briefing simply proves that the account of Mr. Jayme is real as it reveals his disposition online,” he added.

In a text message to INQUIRER.net on Wednesday (May 8,2019) before issuing his statement, Panelo could not explain why Ho and Diaz were in a matrix.

“I did not make the matrix; I just presented it per instruction of the President,” he said, adding that he was just handed the PowerPoint presentation “as is” without explaining the role of Ho and Diaz in the alleged plot.

“In sum, there has been a wrong analysis of the diagram by some media outfits which in turn made the basis of a wrong analysis and conclusions by readers and personalities including Mses Ho and Diaz. It is therefore not surprising why a number of people reacted because the said diagram, together with this erroneous analysis, would indeed lead them to question the same,” he said.

“We just hope that the faulty analysis made [was] not intentional with the sole purpose of casting doubt on the intelligence received and vetted by the Office of the President,” he added.

Asked if Ho and Diaz were involved in the ouster plot, Panelo said no.

Jayme is the owner and creator of metrobalita.net that published the “Ang Totoong Narcolist” videos linking President Duterte’s immediate family to the illegal drug trade.

Asked why he could not explain during the briefing the involvement of Ho and Diaz, Panelo replied that he was pressed for time.

During the briefing on Thursday, he said he was bound for Bohol to attend a campaign rally with the President.

But Panelo did not respond to questions from reporters when he was asked to clarify Ho and Diaz’s involvement, not until he issued a statement on Friday.