Sydney COVID lockdown could be eased if vaccination rate hits 50% 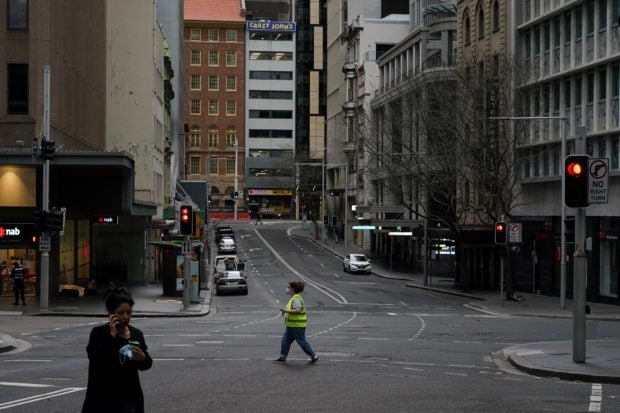 People with protective face masks walk through the quiet city centre during a lockdown to curb the spread of a coronavirus disease (COVID-19) outbreak in Sydney, Australia, July 28, 2021. REUTERS FILE PHOTO

CANBERRA — Australia’s New South Wales, home to Sydney, said on Tuesday it could ease a COVID-19 lockdown that demands five million people stay at home until the end of August if 50% of the population is vaccinated, even as new infections linger near a 16-month high.

A lifting of restrictions in New South Wales, the country’s most populous state, would be a boost for Prime Minister Scott Morrison, under intense pressure for his government’s handling of the vaccine rollout, with the threat of a second economic recession in as many years looming.

New South Wales, which accounts for a third of all activity in Australia’s A$2 trillion ($1.47 trillion) economy, has struggled to contain a surge of cases of the highly infectious Delta variant in Sydney, the country’s biggest city, despite the lockdown, currently due to be lifted on Aug. 29.

While New South Wales on Tuesday reported another 199 locally acquired COVID-19 cases in the past 24 hours – near a 16-month high of 239 infections recorded in one day last week – state Premier Gladys Berejiklian said curbs could be eased if six million people are vaccinated by the time the lockdown is due to end.

“Six million jabs is roughly half the population with at least one or two doses,” Berejiklian told reporters in Sydney. “That gives us additional options as to what life looks like on 29 August.”

Berejiklian didn’t say exactly how many in New South Wales were fully vaccinated as of Tuesday, but said the state is on course to meet its vaccination target. She cautioned the number of people in the community while infectious would also need to come down.

Although Australia has largely kept its COVID-19 numbers relatively low, with just over 34,500 cases and 925 deaths, its national vaccination rollout has hit several roadblocks due to changing medical advice on AstraZeneca doses over blood clot concerns and supply constraints for Pfizer inoculation.

The target in New South Wales comes just days after national premier Morrison promised lockdowns would be “less likely” once the country inoculates 70% of its population above 16 years of age – up from 19% now. Morrison expects to hit the 70% mark by the end of the year.

Meanwhile, Queensland state said on Tuesday it has reported 16 new COVID-19 cases in the past 24 hours, the highest daily number of new cases in a year.