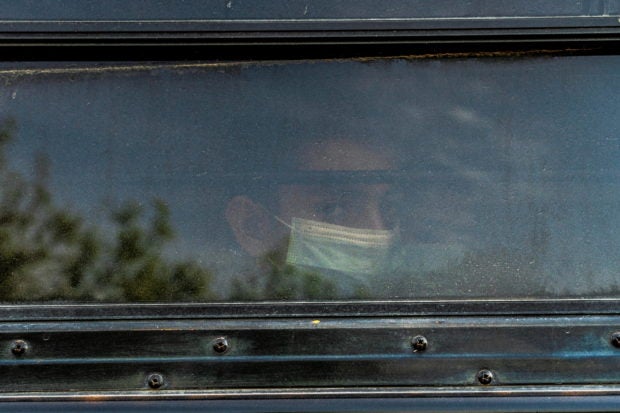 A young asylum-seeking migrant looks out from the window on a bus while waiting to be transported by the U.S. Border Patrols after crossing the Rio Grande river into the United States from Mexico in La Joya, Texas, U.S., March 26, 2021. REUTERS FILE PHOTO

WASHINGTON — Pro-migrant groups frustrated with President Joe Biden’s continued use of an “inhumane” Trump-era expulsion policy for migrant families will seek to block it in court, the groups said on Monday, deepening the president’s challenges on the U.S.-Mexico border.

The groups will restart litigation over Biden’s use of the so-called Title 42 order that allows U.S. officials to send migrants back to Mexico without the chance to seek asylum or other protections in the United States.

The March 2020 order issued by the U.S. Centers for Disease Control and Prevention (CDC) was put in place in the name of public health during the coronavirus pandemic and updated in October.

The CDC again renewed the policy on Monday, issuing an updated version of the order that called for the measure to be reevaluated every 60 days, rather than 30 days. It also formalized a process to grant exceptions to the expulsion order for certain migrants undertaking approved testing for COVID-19 in Mexico.

The outcome of the court case could complicate the Biden administration’s efforts to deal with a 20-year high in migrant arrests at the southern border. It has relied heavily on the support of these pro-migrant groups to help it garner public support for Biden’s vision of a more humane and orderly immigration system.

If opponents are able to block the application of Title 42 against migrant families, it could make it hard to detain incoming migrants, forcing them to be released into the United States.

The American Civil Liberties Union (ACLU), the leading group representing migrant families barred under the expulsion order, said in a joint court filing with the U.S. Department of Justice on Monday that negotiations to resolve the matter had “reached an impasse” and that a lawsuit to halt the policy should resume.

Biden, a Democrat who took office in January, has rolled back many of the hardline immigration measures of his Republican predecessor, former President Donald Trump.

Pro-migrant groups and some Democrats have criticized Biden over his willingness to expel migrants, including families and vulnerable asylum seekers, to danger in Mexico.

In a statement, the pro-migrant groups called the Title 42 policy “inhumane” and “illegal” and said the Biden administration left them no choice but to resume a legal fight over the order that had been put on pause in February for negotiations.

“The administration is choosing to treat refugees like political pawns, and so we are eager to return to court so we can end Title 42 for families once and for all,” said Noah Gottschalk, global policy lead for Oxfam America, one of the groups involved in the litigation.

The ACLU and a group of non-profit organizations have been identifying hundreds of particularly vulnerable migrants in Mexico that have been allowed to enter the United States for protection. The groups have said they plan to phase out that process, putting further pressure on the administration to rescind Title 42.

In a court filing related to the legal challenge, a top Biden border official defended Title 42 as necessary to protect U.S. government workers, migrants and the American public amid growing concern over the highly transmissible Delta variant.

David Shahoulian, assistant secretary for border and immigration policy with the U.S. Department for Homeland Security (DHS), said the rate at which migrants encountered at the border were testing positive for COVID-19 had “increased significantly in recent weeks.” The number of U.S. border agents isolated or hospitalized due to the coronavirus was also rising, he said.

Shahoulian did not provide exact figures for migrants and agents who tested positive.

Arrests of migrants at the southern border in July are set to outpace the 178,000 picked up in June, based on preliminary figures. Shahoulian said the increase was part of a record rise in arrests that necessitated the order.

Many public healthcare experts, however, have challenged the argument that Title 42 is necessary to help curb the spread of COVID-19, saying there is no scientific data to support that rationale.