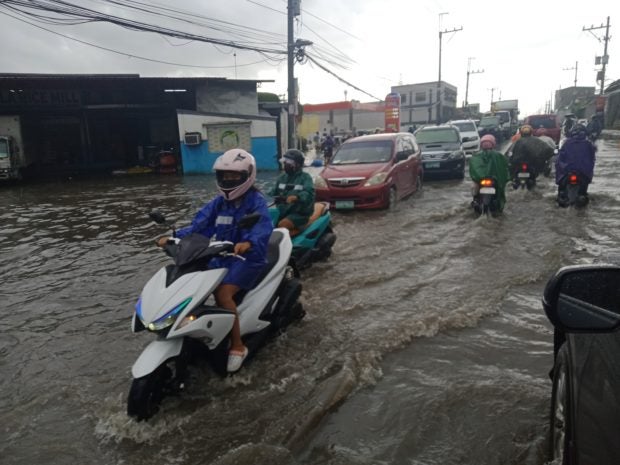 Motorists pass through an inundated road in the Bocaue portion of the MacArthur Highway in Bulacan province. The rain-induced flood has hit at least 10 towns and cities in the province. (Photo by Carmela Reyes-Estrope)

CITY OF MALOLOS, Bulacan—Over 500 families or 1,700 individuals in Bulacan province were still staying in various evacuation centers due to the widespread flooding that persisted in at least 10 towns and cities, according to the Bulacan Provincial Disaster Risk Reduction and Management Office (PDRRMO).

The displaced residents were from low-lying and vulnerable villages of Hagonoy, Pulilan, Calumpit, Paombong, Bulakan, City of Malolos, Guiguinto, Bocaue, Balagtas and Obando.

Based on the PDRRMO data, at least P170 million work of damaged roads and farms were recorded in the province due to the incessant rains spawned by the southwest monsoon.

The heavy downpour also raised the elevation at the Angat Dam to an average of half a meter daily since July 19. The latest dam elevation was 192 meters above sea level at 8 a.m. on Monday, Aug. 2. INQ