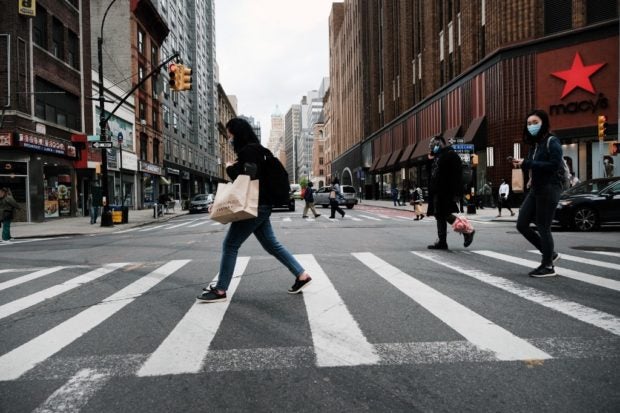 People walk through downtown Brooklyn on May 3, 2021 in New York City. (Getty Images via AFP)

WASHINGTON — Millions of Americans face could find themselves homeless starting Sunday as a nationwide ban on evictions expires, against a backdrop of surging coronavirus cases and political fingerpointing.

With billions in government funds meant to help renters still untapped, President Joe Biden this week urged Congress to extend the 11-month-old moratorium after a recent Supreme Court ruling meant the White House could not do so.

But Republicans balked at Democratic efforts to extend the eviction ban through mid-October, and the House of Representatives adjourned for its summer vacation Friday without renewing it.

Several left-wing Democrats spent the night outside the Capitol in protest — calling out their colleagues over the failure to act.

“We slept at the Capitol last night to ask them to come back and do their jobs. Today’s their last chance,” tweeted Congresswoman Cori Bush, who has herself experienced homelessness and was joined by fellow progressives Ilhan Omar and Ayanna Pressley.

With the clock ticking down to Sunday, the country was braced for a heartbreaking spectacle — families with their belongings at the curbside wondering where to go.

One of those at risk is Terriana Clark, who was living out of a car with her husband and two stepchildren for much of last year, before finding a teaching job and an apartment in Harvey, Louisiana.

Jobless again and struggling to pay rent after a bout of illness, the 27-year-old told The New Orleans Advocate she applied to a local assistance program four months ago but is still waiting for help.

Up north in Michigan, Mary Hunt, who makes minimum wage driving a medical taxi, likewise fell behind on her rent on a mobile home because she got sick with Covid.

She was served with eviction papers, and frets over what she will do with her stuff and her five cats and one dog.

“How do I choose which cats to keep? It’s not going to happen. I’m not going to leave any of them behind,” Hunt told National Public Radio this week.

“If I lose this house, then they go in the car with me. And people can think I’m a crackpot, but I’m not giving up my family,” Hunt said.

Unlike other pandemic-related aid that was distributed from Washington, such as stimulus checks, it was states, counties, and cities that were responsible for building programs from the ground up to dole out assistance earmarked for renters.

The Treasury Department said that as of June, only $3 billion in aid had reached households out of the $25 billion sent to states and localities in early February, less than three weeks after Biden took office.

The Centers for Disease Control and Prevention (CDC) ordered the eviction moratorium in September 2020, as the world’s largest economy lost over 20 million jobs amid the pandemic shutdowns. The CDC feared homelessness would boost coronavirus infections.

Although more than half of those jobs were since recovered, many families still have not caught up on missed rent payments.

The Census Bureau’s latest Household Pulse survey showed that of 51 million renters surveyed, 7.4 million were behind on rent, and nearly half of those said they risked being evicted in the next two months.

Nearly 80 percent of households that are behind on their rent as of early July lived in Covid hot spots, according to a study by the Jain Family Institute.

“Putting people out on the street is probably not going to have good effects on community transmission rates,” the institute’s housing policy researcher Paul Williams told CBS MoneyWatch.

Immediately after taking over, the Biden administration had eased paperwork and eligibility requirements for an emergency rental assistance program, but it has stressed that management remains in the hands of state and local officials.

“There can be no excuse for any state or locality not accelerating funds to landlords and tenants that have been hurt during this pandemic,” Biden warned Friday.

The CDC eviction moratorium and other protections prevented an estimated 2.2 million eviction filings since March 2020, said Peter Hepburn, a research fellow at the Eviction Lab at Princeton University.

TAGS: US COVID-19 cases, US eviction threat due to COVID-19