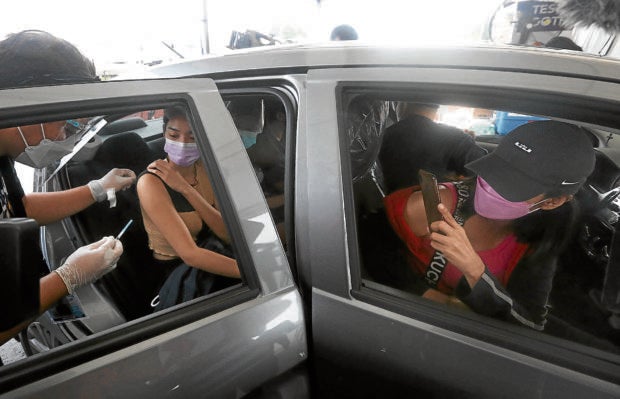 COUNTDOWN TO NEW LOCKDOWN Amid renewed public anxiety over a possible case surge, a drive-through COVID-19 vaccination center is again set up on Saturday near Quirino Grandstand in Manila. The national government says it will use the upcoming two-week lockdown in Metro Manila to step up the inoculation drive. (MARIANNE BERMUDEZ / Philippine Daily Inquirer)

MANILA, Philippines — The Department of Health (DOH) does not expect the strict lockdown measures to curb the spread of the coronavirus in Metro Manila where the number of active cases daily could rise to 18,000 and up to 30,000 by September, but it will give time for authorities to prepare to deal with a possible surge.

Health Undersecretary Maria Rosario Vergeire on Saturday said the figures were estimates made by experts from the Autumn Group and a team that employed the Feasibility Analysis of Syndromic Surveillance using Spatio-Temporal Epidemiological Modeler For Early Detection of Diseases, or FASSSTER system.

“What we’re saying is these lockdowns will help us prepare the system, but it is not going to control the spread. We still need to prepare the system, do what we have to do to prevent the further spread of this Delta variant,” she said during Saturday’s Laging Handa briefing.

“Please take note that these are initial projections and DOH, with our experts, have provided comments and recommendations to further improve on this,” she later told reporters.

Metro Manila will come under enhanced community quarantine (ECQ), the strictest government lockdown category, from Aug. 6 to Aug. 20 as part of efforts to deal with the threat posed by the highly transmissible Delta variant of SARS-CoV-2, the virus that causes COVID-19.

The FASSSTER team is composed of experts in disease modeling, health informatics, social computing and health systems development, according to the DOH.

Vergeire did not specify the “preparations” needed to deal with the expected rise in cases in the National Capital Region (NCR).

Earlier this week, Dr. Alethea de Guzman, acting director of the Epidemiology Bureau of the DOH, advised local governments to strengthen their prevent-detect-isolate-treat-reintegrate strategies and to expand their health-care systems to handle the possible rise in the number of cases due to the more contagious variant.

The Delta variant is one of the factors that the DOH is now considering with regard to the increase in coronavirus infections, though it cannot be certain as not all samples are subjected to genome sequencing to identify the variant responsible, Vergeire said.

She reminded the public to be doubly careful because Delta was highly transmissible, given that those who were infected carry a higher viral load that could be spread even during brief encounters.

“We could have a fleeting moment [with an infected person] and we could be infected,” Vergeire said.

The chances of vaccinated persons infecting others is not lessened because of the high viral load from those infected, she added.

But Vergeire said there was no sufficient evidence yet to say that the variant causes more severe infection.

Under ECQ, only essential businesses would be allowed to fully operate and the movement of the general population would be restricted.

Business groups and the country’s economic managers are expecting another economic slowdown resulting from the two-week ECQ in NCR, the country’s industrial and financial hub.

He added that the National Economic and Development Authority, which he heads, also estimated that a week of ECQ would push 177,000 more Filipinos into poverty, and 444,000 would temporarily lose their jobs.

Budget Secretary Wendel Avisado on Friday said the government was looking for funds to compensate those who would lose their jobs during the ECQ.

The Aug. 6 to Aug. 20 lockdown would be the third time the national capital would be under ECQ. The first was in mid-March to mid-May last year, which devastated the economy. The second was in late March to mid-April this year due to a surge in COVID-19 cases.

The DOH also reported that of the 54,857 people screened for the virus on Thursday, 8,063 individuals tested positive, for a positivity rate of 14.7 percent.

The World Health Organization says that a positivity rate of less than 5 percent indicates that virus spread is under control.

At the height of the surge fueled by the Alpha and Beta variants of the virus last April, the country’s positivity rate reached 24 percent. The Delta variant is said to be up to 60 percent more transmissible than the Alpha variant.