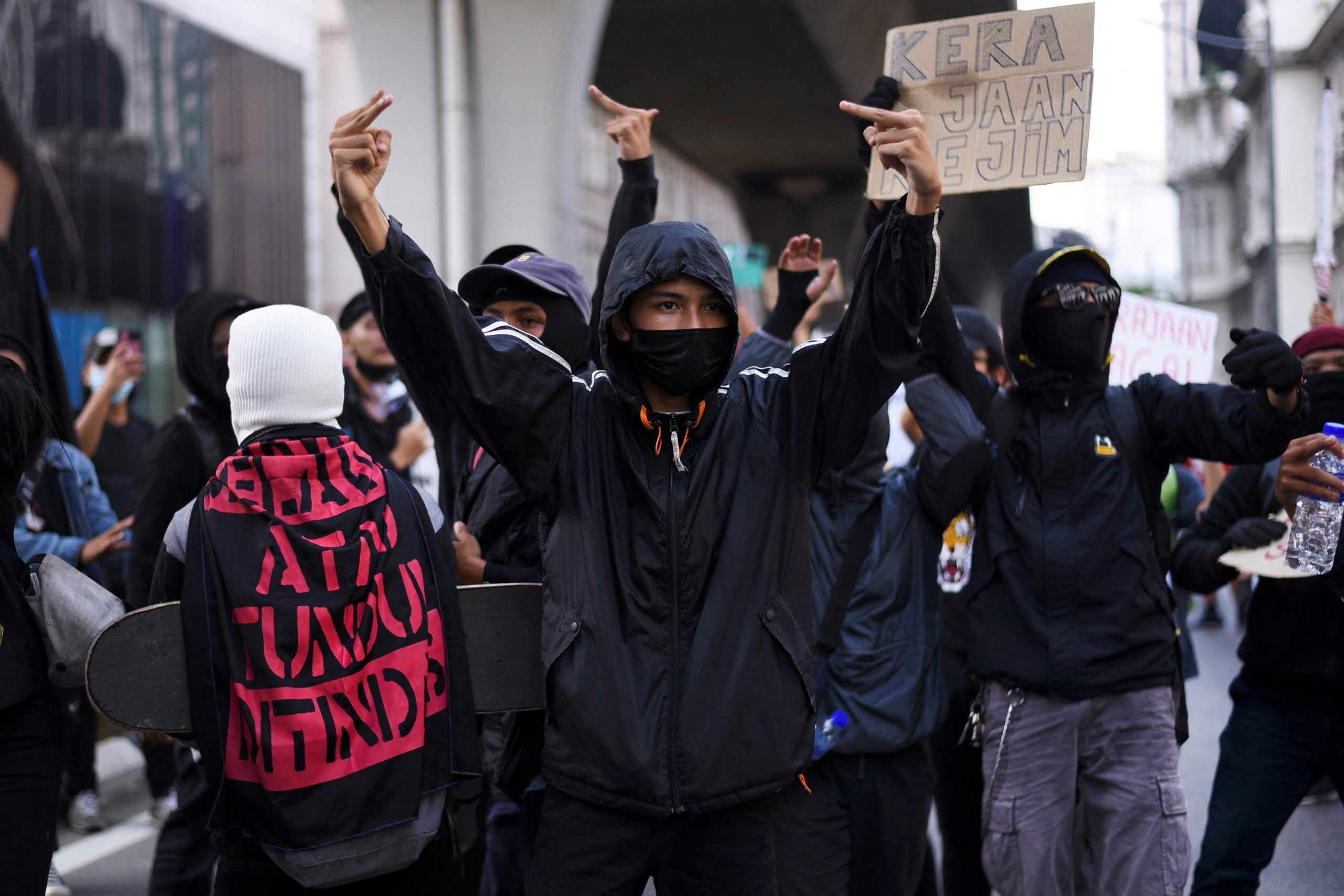 Malaysians gesture as they take part in a rare anti-government rally in Kuala Lumpur on July 31, 2021, despite a tough Covid-19 coronavirus lockdown in place restricting gatherings and public assemblies. (Photo by Arif KARTONO / AFP)

KUALA LUMPUR — Hundreds of black-clad Malaysians staged an anti-government protest Saturday in defiance of a ban on public gatherings under coronavirus curbs, piling pressure on the embattled prime minister to resign.

The mostly young protesters, wearing masks and keeping a distance from one another, waved banners reading “failed government” as well as black flags.

It was the first sizeable demonstration in Malaysia for some time, as many had been reluctant to take to the streets due to virus curbs and for fear of getting infected.

But anger is growing at the government’s handling of a virus outbreak — which is escalating despite a lockdown — and Prime Minister Muhyiddin Yassin’s attempts to keep his crisis-riven administration in power.

“We fight because while the people are suffering, this government is busy playing politics,” Karmun Loh, taking part in the protest in downtown Kuala Lumpur, told AFP.

“This government is… crippling the economy and also destroying our country’s democracy.”

“He needs to step down.”

There was a heavy police presence and officers blocked attempts by protesters to enter a central square before the rally peacefully dispersed.

Organisers said about 1,000 demonstrators took part but police put the number at around 400.

Police told local media that the protesters will be called in for questioning as they had violated the ban on gatherings.

Muhyiddin took power at the head of a scandal-plagued coalition last year without an election following the demise of a reformist administration headed by Mahathir Mohamad.

But his government is on the verge of collapse after allies withdrew support.

He came under renewed pressure to step down this week after parliament convened following a months-long suspension as part of a virus state of emergency.

His government was accused of dodging a vote that would have tested its majority — infuriating rival MPs and drawing a rare rebuke from the country’s revered king.

Muhyiddin faced fresh criticism when officials announced Monday’s parliament session, the final day of the five-day sitting, had been postponed after several virus cases were detected in the legislature.

“The spread of Covid-19 cannot and should not be used as an excuse to adjourn… the parliament sitting,” the “Pact of Hope” opposition coalition said in a statement.

Sunday is the final day of the six-month state of emergency but the nationwide lockdown will remain in place.

Malaysia’s outbreak is being driven by the Delta variant, and health officials logged a new daily record of 17,786 cases Saturday.

Authorities have reported over 1.1 million virus cases and more than 9,000 deaths.