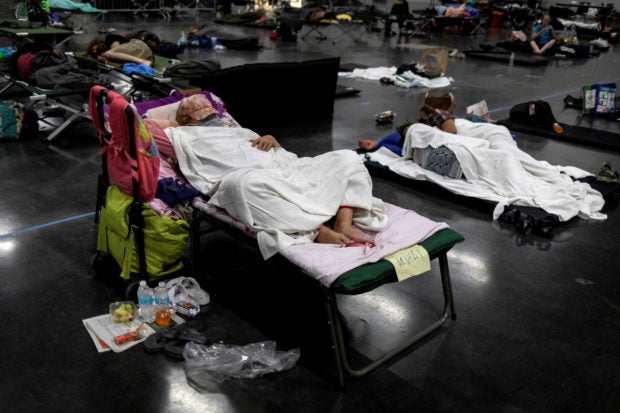 People sleep at a cooling shelter set up during an unprecedented heat wave in Portland, Oregon, U.S. June 27, 2021. (REUTERS)

More than 60 million Americans across the Pacific Northwest and the U.S. Southeast were under a heat advisory on Friday, facing temperatures well into the 100s and near-record high temperatures in parts of Idaho and Washington.

The temperature in Spokane, Washington, could climb to 102 degrees Fahrenheit (38.9° C) on Friday, tying a record high from 1929, while Lewiston, Idaho, could see a near-record of 108 F, National Weather Service forecaster Bob Oravec said.

High-temperature records were shattered across the Pacific Northwest last month when a days-long heat wave killed hundreds of people and paralyzed a region accustomed to temperate summers, and where many residents do not have air conditioning.

The cities of Portland and Salem in Oregon, and Seattle in Washington all set new temperature records above 110 F in late June.

A study https://www.reuters.com/business/environment/heat-wave-pacific-northwest-could-soon-repeat-due-climate-change-research-2021-07-07 published earlier this month found that the region’s devastating heat wave would have been “virtually impossible” without the impact of climate change.

Such record-smashing heat waves may become two to seven times more frequent around the world over the next few decades, scientists found in another study published this month.

While summer heat waves are more common in the U.S. Southeast and the parts of the Great Plains that were experiencing high temperatures on Friday, the National Weather Service warned that the high heat index – a combined effect of high temperature and humidity – could lead to dangerous conditions.

“Extreme heat and humidity will significantly increase the potential for heat related illnesses, particularly for those working or participating in outdoor activities,” the National Weather Service’s Mobile, Alabama, office said in a Friday advisory.