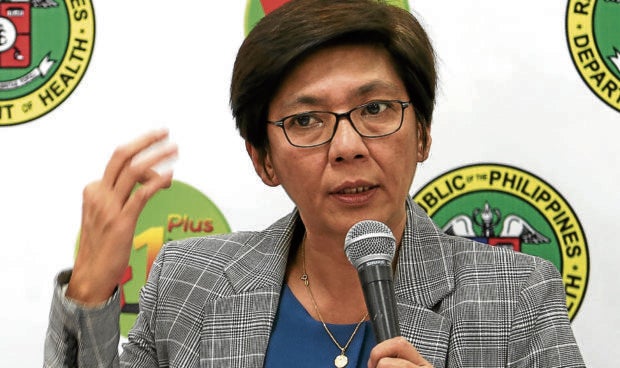 The Department of Health (DOH) has yet to declare whether there is now a community transmission of the more contagious Delta variant of the coronavirus, but it advises the public to act like it is already happening.

“For now we can’t declare that, since [the confirmed] cases are still linked; we can trace one or two cases to each other,” Health Undersecretary Maria Rosario Vergeire said on Friday.

But that’s no reason to be complacent, Vergeire said at a briefing. “We still have to prepare. We need to act as if there is community transmission already, so we can be more cautious.”

The DOH continued to temper its messaging even as it reported a new high in daily recorded infections since May 28, and the national government reimposed the strictest level of community quarantine in Metro Manila due to the growing Delta variant threat.

For community transmission to be declared, based on the World Health Organization’s guidelines, the nature of infections must meet three criteria: there should be a large number of cases not linkable to transmission chains, an observed increase in cases detected through laboratory surveillance, and multiple unrelated clusters in several areas of the country.

As of July 30, the University of the Philippines-Philippine Genome Center (UP-PGC) has detected 216 Delta variant cases in the country.

However, the center is only able to sequence less than 1 percent of all positive COVID-19 cases. Earlier, the independent pandemic monitor OCTA Research Group said as much as 7 percent of the country’s COVID-19 cases could be Delta variant cases.

On Thursday night, the DOH said 97 new Delta cases were found, 88 of which were local cases, or involving patients with no known travel histories. Overall, 216 Delta cases have been confirmed in the country since May 11.

The highest single day total was recorded on May 28, with 8,735 new infections.

There were 61,920 active cases, or currently sick individuals. Of this number, the majority, or 94 percent of cases, were mild. Meanwhile, 1.2 percent were asymptomatic, 1.2 percent were in critical condition, 2.1 percent had severe symptoms and 1.49 percent were moderate cases.

Another 2,854 individuals have recovered, bringing the total number of survivors to 1,449,579.

But 145 more patients have succumbed to the respiratory disease, pushing the death toll to 27,722.

Two laboratories were unable to submit data on time, while 25 duplicates were removed from the total case count.

Vergeire also disclosed that six of the eight Delta variant cases in the country who had died were local cases.

Two of the fatalities were from Cordova, Cebu, while there was one fatality each from San Nicolas, Ilocos Norte; Balanga, Bataan; Pandan, Antique; and Pandacan, Manila.

The two other deaths were returning overseas Filipinos (ROFs), she said.

Meanwhile, at the same Friday briefing, Vergeire also said there will be “no distinction” between vaccinated and unvaccinated individuals, when it comes to mobility restrictions that will be imposed in the National Capital Region (NCR) from Aug. 6 to Aug. 20, when it will be put under the stricter enhanced community quarantine (ECQ) classification.

Vergeire said the health department fully supported the ECQ for NCR. She said the DOH had presented to the Inter-Agency Task Force for the Management of Emerging Infectious Diseases (IATF) the different projections made by modeling tool FASSSTER (Feasibility Analysis of Syndromic Surveillance Using Spatio-Temporal Epidemiological Modeler For Early Detection of Diseases).

“The decision for the additional restrictions for this week, and for heightened restrictions in the coming weeks is so that we can prevent the further spread and delay the rise of cases in the country,” she said.