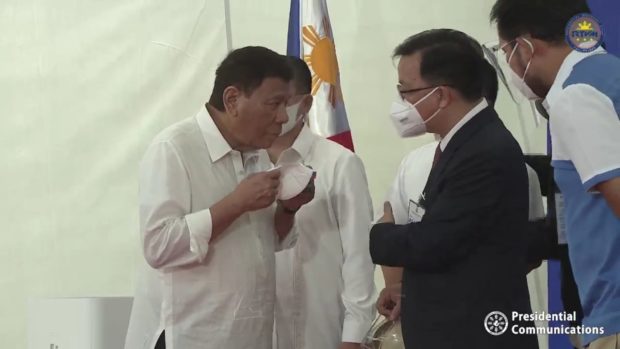 President Rodrigo Duterte speaks with Chinese Ambassador to the Philippines Huang Xilian during the inauguration of the Estrella-Pantaleon Bridge connecting Makati and Mandaluyong. Screengrab from RTVM

MANILA, Philippines — President Rodrigo Duterte on Thursday lauded workers for their efforts and the Chinese government for funding the Estrella-Pantaleon Bridge connecting the cities of Makati and Mandaluyong.

Duterte refused to take credit over the project as he recalled how Public Works Secretary Mark Villar congratulated him for the completion of the bridge.

“I had no time to explain to him but in parting, I said this is not my work. This is the work of the people involved directly, the People’s Republic of China who provided the money and the workforce of the DPWH, its dedicated workers at yung mga taong naghirap dito,” Duterte said in his speech at the Estrella-Pantaleon Bridge’s inauguration.

“Sa kanila itong proyekto, this belongs, the credit and honor belong to the one who funded the project and of course the one who toiled night and day to make this bridge a reality,” he added.

The Estrella-Pantaleon Bridge was built at a cost of P1.46 billion through a grant from China, which Duterte said was proof of “good relations” between the two nations.

“The P1.46-billion funding that they have extended highlights the goodwill of the Chinese people and its government, and further cements the good relations between our two countries,” Duterte said.

The 506-meter Estrella Pantaleon bridge is billed to cut travel time between the cities of Mandaluyong and Makati to five minutes.

“It will also support our efforts for the gradual reopening of our economy and improve the resilience of roads and bridges in Metro Manila against natural disasters,” Duterte said.

“On this note, I wish to only assure our people that this administration remains faithful in realizing a safer and more convenient travel experience for everyone,” he went on.

In a separate statement, Villar said the Estrella-Pantaleon bridge can accommodate about 50,000 vehicles daily and is among the projects under the Metro Manila Logistics Improvement Network to address traffic congestion on Edsa.