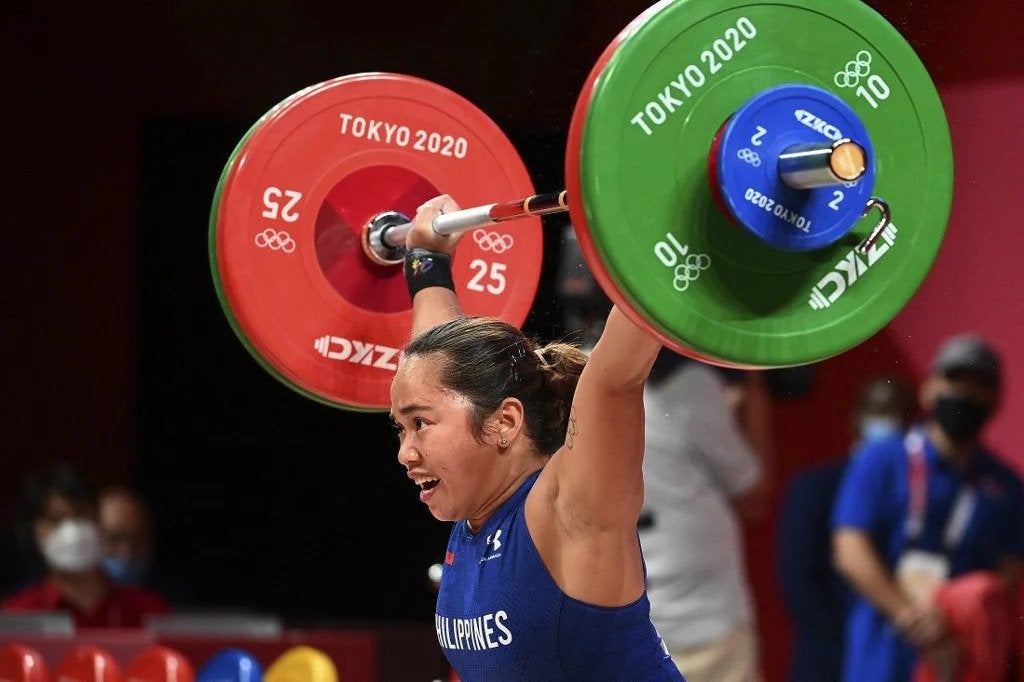 Philippines’ Hidilyn Diaz competes in the women’s 55kg weightlifting competition during the Tokyo 2020 Olympic Games at the Tokyo International Forum in Tokyo on July 26, 2021. (Photo by Vincenzo PINTO / AFP)

MANILA, Philippines — The House of Representatives is eyeing to confer the Congressional Medal of Excellence on weightlifter Hidilyn Diaz following her historic win in the 2020 Tokyo Olympics.

The measure was filed on July 28, a copy of which was shared with the media on Thursday.

“She represents not just the best of Zamboanga, Mindanao, and the Philippine Air Force, but the best of all Filipinos who have studied, trained and persevered in their lives and careers despite the myriad of challenges in order to achieve the pinnacle of success,” the lawmakers said in the resolution.

“Hidilyn Diaz has now inspired countless young Filipino women and girls, athletes, and young Filipino dreamers to reach for their goals and achieve their dreams, and [her] fighting heart and indomitable spirit has ignited hope and dreams in our country reeling from the current pandemic and economic downturn by bringing honor and pride to all Filipinos, whether in the country or abroad,” they added.

If adopted, Diaz will be the first-ever recipient of the award since the institutionalization Congressional Medal of Excellence is still under House deliberation.

Under House Resolution No. 1981 filed by Velasco, Romualdez, and Paduano on July 26, the House leaders are proposing the institutionalization of the Congressional Medal of Excellence for national athletes who will win gold medals at the Olympic games.

“There is a need for the House of Representatives to institutionalize the Congressional Medal of Excellence to particularly give honor and commendation to these exceptional modern-day national heroes in sports who win the gold medal in the Olympic Games,” the House leaders said in the resolution.

“This award will immortalize their achievements and give them a legacy to leave behind by providing future generations with inspirational lessons that they can take to heart,” they added.

Diaz, in her fourth straight Olympics, delivered the Philippines’ breakthrough gold medal after conquering the women’s 55 kilograms weightlifting competition at the Tokyo Olympics.