Beekeeper to stand trial over forest fire near Athens 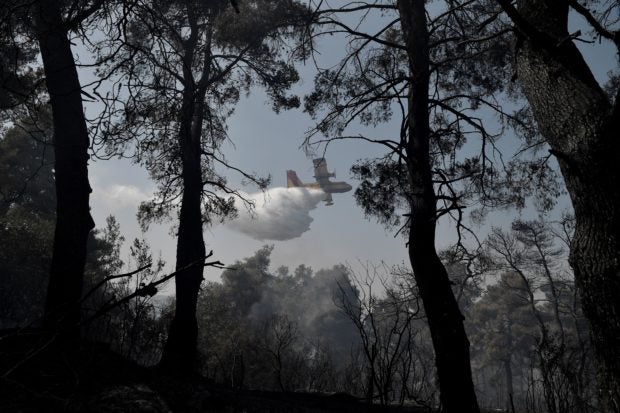 An aircraft drops water over a forest fire in Dionysos, north east of Athens, on July 27, 2021. AFP

DIÓNYSOS, Greece — A 64-year-old beekeeper was charged on Wednesday for negligence over a forest fire that damaged homes and destroyed cars in the northern suburbs of Athens, a judicial official said.

The blaze raged on Tuesday at the base of Mount Penteli, where a fire in July 2018 went on to claim 102 lives in Greece’s worst-ever toll from a forest inferno.

Tuesday’s fire did not cause any casualties and was now “under control”, firefighters said.

The beekeeper appeared before a prosecutor earlier on Wednesday and will stand trial facing the charge of arson by negligence, which is a misdemeanor, the judicial official told AFP. He was released.

The man has beehives on the hill overlooking the cemetery of the town of Stamata, where the fire seems to have started. He is suspected of burning foliage near his hives, according to the ministry of civil protection.

Four other people arrested on Tuesday as part of the investigation were quickly released by Greek police.

The ministry said that “one house was burnt down, 12 others suffered damage, notably to their roofs” and around 10 cars were torched.

A total of 310 firefighters were mobilized to the area 30 kilometers (19 miles) north of Athens, backed by 10 helicopters and eight firefighting planes, the fire service said, with strong winds complicating operations.

Greece is hit by forest fires every summer, but experts have warned that global warming increases both their frequency and intensity.

Another heatwave is forecast for the country starting on Thursday, with temperatures expected to rise above 40 degrees Celsius (104 Fahrenheit).