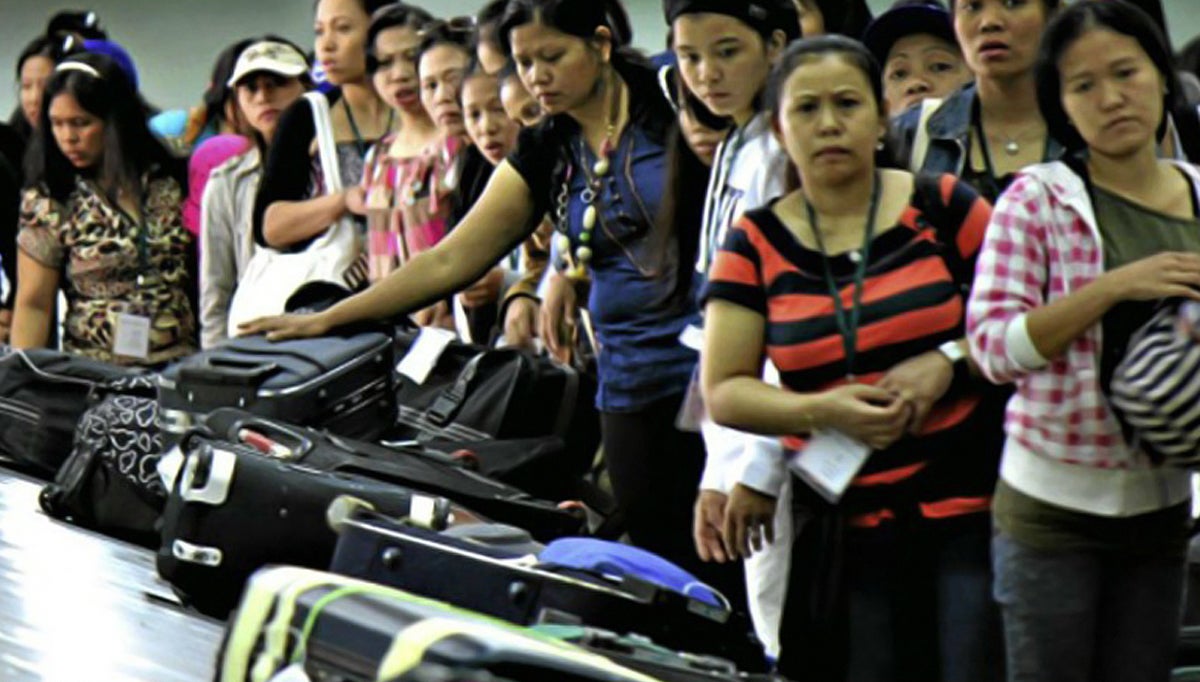 MANILA, Philippines—While Overseas Filipino Workers (OFWs) are already facing great risks, these have been heightened further by the ongoing COVID-19 pandemic, according to a research study presented on Wednesday (July 28) in Manila.

The study, prepared by Alcestis “Thetis” Abrera Mangahas, highlighted the increased risks and vulnerabilities that OFWs face in the countries where they work. Mangahas is former deputy regional director of the International Labor Organization (ILO) for the Asia-Pacific region.

Ahead of the commemoration of the World Day Against Trafficking (WDAT) on Friday (July 30) and along with Blas F. Ople Policy Center and Training Institute (Ople Center) and International Organization for Migration (IOM), Mangahas released key findings of her study “Seeking Justice: Developing Improved OFW Feedback and Complaints Mechanisms.”

According to former labor undersecretary Susan Ople, head of the Ople Center, the research was done under the ALTER, or the “Aligning Lenses Towards Ethical Recruitment,” a joint project of the IOM Philippines, Ople Center with the help of the Global Fund to End Modern Slavery (GFEMS).

The ALTER project, which was launched in September 2020, aims to “sustainably reduce the prevalence of trafficking among OFWs by empowering the Philippine government and civil society to develop ethical recruitment standards and practices.”

While the data used in the study were collected before the COVID pandemic, the presenters explained that these can help emphasize the need to address the cases and needs of overseas Filipinos and migrant workers.

“It is our hope that the research study and recommendations shall be able to contribute to ongoing efforts to capture and effectively address more worker grievances through a streamlined and improved worker feedback mechanism and case management capabilities,” said Ople at the online press conference called to present the study’s findings.

One of the most important points in the study was the discernible discrepancy in cases and risks between male and female OFWs.

“Two words: Gender matters. Let us remember that the most vulnerable among our migrant workers are women,” said Ople.

According to the study, there was an increase in the number of female OFWs, most of them concentrated in domestic work and were subjected to long hours.

According to results of the 2019 Survey on Overseas Filipinos by the Philippine Statistics Authority (PSA) released in 2020, there are more Filipino women than men working abroad. Women OFWs make up 56 percent of the total while men compose 44 percent. 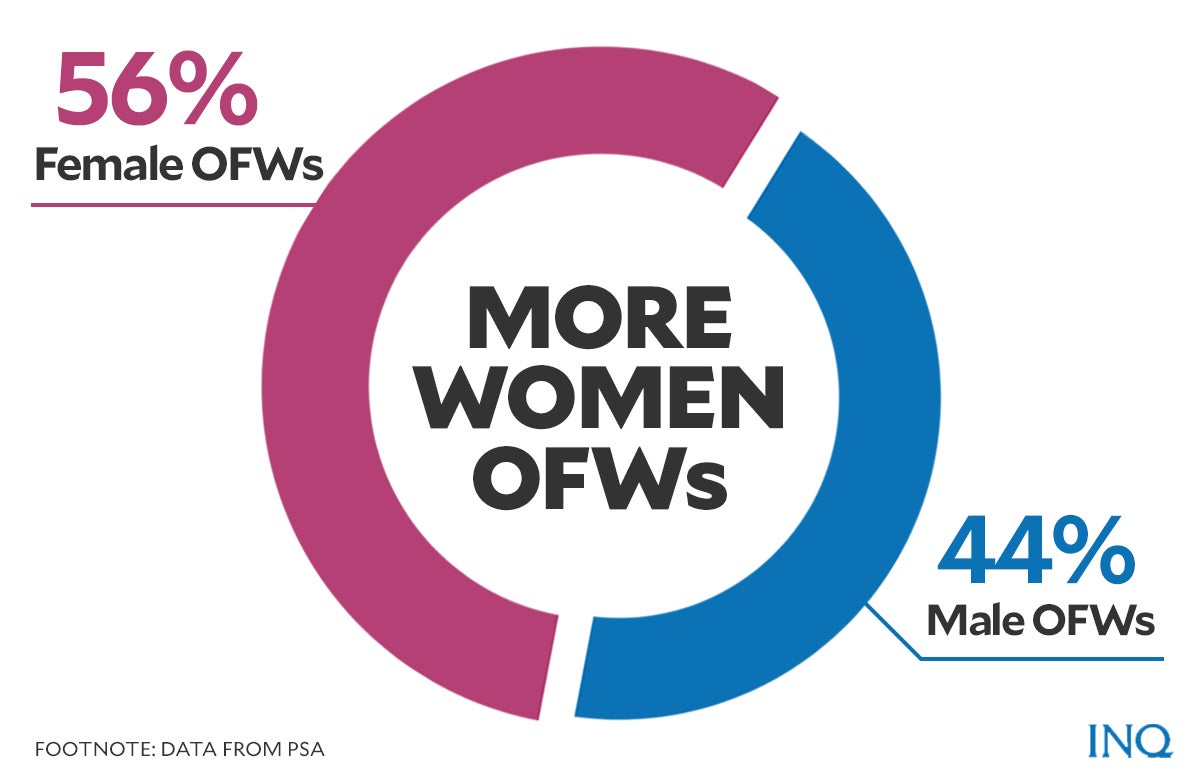 Data from the Overseas Workers Welfare Administration (OWWA) showed that out of 23,986 cases of abuse and others involving workers in the Gulf Cooperation Council (GCC) recorded last year, at least 18,002, or 75.05 percent, involved female overseas Filipinos and migrant workers. 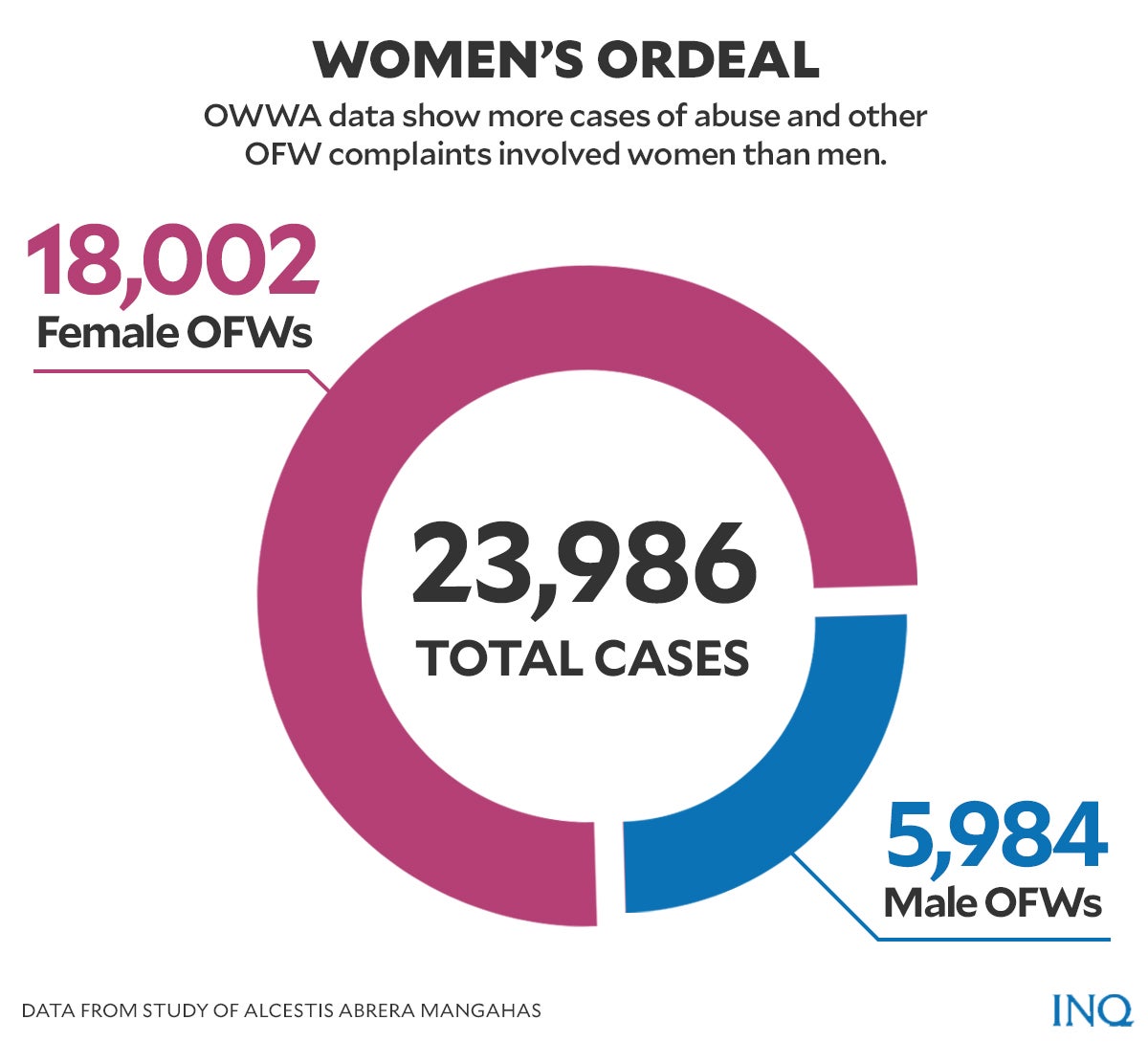 Compared to other cases logged by OWWA, cases related to sexual abuse or harassment had one of the lowest numbers with 444 cases.

However, 441 of those were reported by female OFWs and only three by male OFWs. 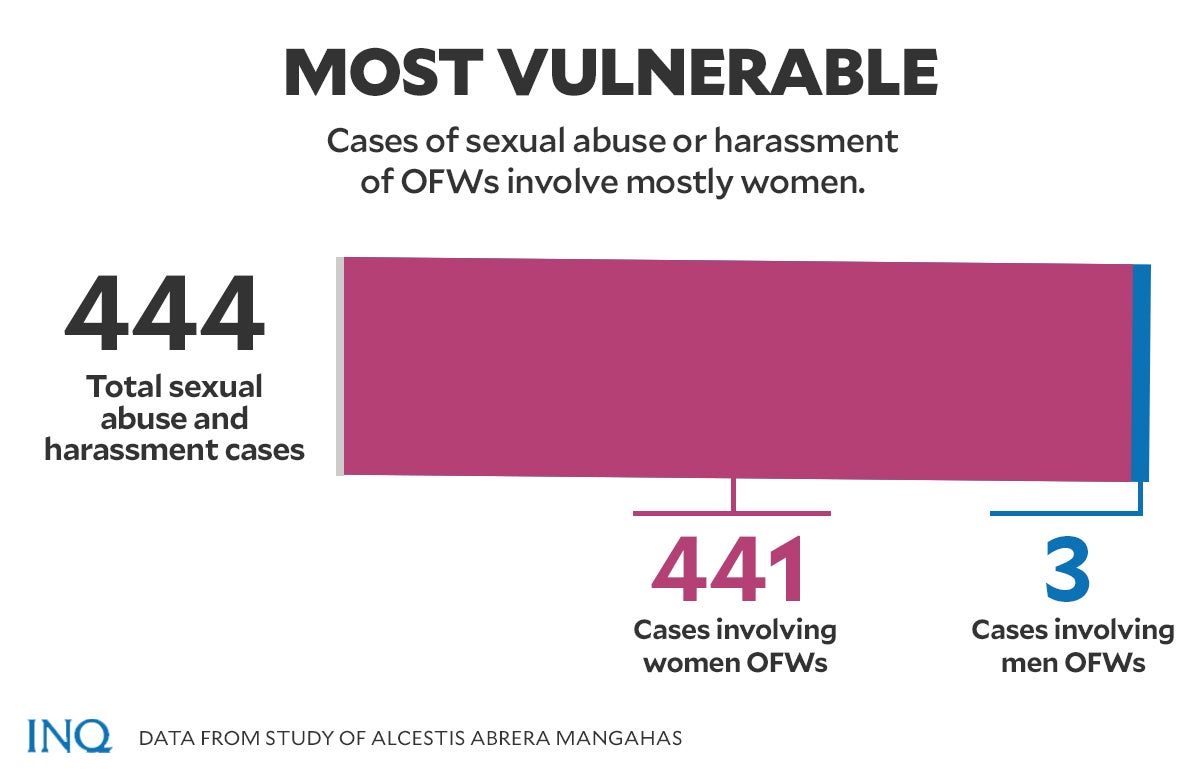 More female OFWs also suffered from rape—75 out of the total 77 cases.

Cases of maltreatment or mistreatment were also high among female OFWs with at least 5,500 cases compared to 545 cases among male OFWs.

Around 2,272 of the total 2,578 cases of immigration or document-related problems were flagged by female OFWs.

At least 873 cases involving personal problems were reported by female OFWs while only 117 male OFWs reported the same.

At least 6,523 female OFWs reported being a victim of contract violation while 3,097 cases involved males. 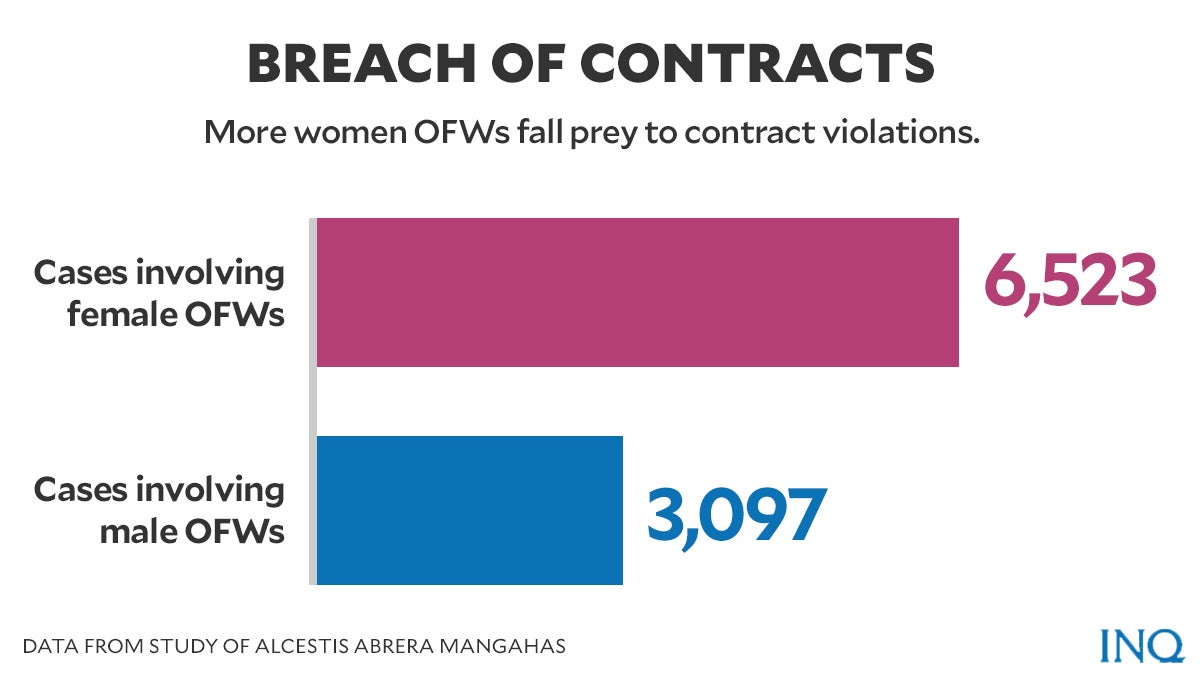 In terms of cases involving health-related problems, 1,227 were reported by female OFWs and 455 by males.

But more males complained of contract substitution—1,459 cases—compared to complaints from females, 1,091.

While data on OFW-reported cases seem lopsided against women, Mangahas said there’s a need to be more gender-sensitive and inclusive, which could require taking a closer look at unreported cases involving male OFWs.

Mangahas said cases involving males were only 25 percent, “I think being gender-sensitive also means that we need to understand what are the kinds of cases that men are actually experiencing.”

“It looks like they’re the ones who are beginning to think more that these are a natural part of the contracts, that the embassies are not sympathetic to them. All of these expressions are there,” she said during her presentation.

“Let’s not be insensitive as well with the situation of men,” she added.

Troy Dooley, head of Programmes at IOM-United Nations (UN) Migration, supported Mangahas’ statement and pointed to similar proportions of women to men ratios in reported cases of modern slavery across the globe.

“When we look at the global estimates of modern slavery, there’s obviously more representation of women to males,” said Dooley.

“But when you go down to forms of trafficking, forms of exploitation, you sort of have different numbers as well,” said Dooley.

“What you will find is that in specific sectors, let’s say construction which male-dominated, you will have different forms of exploitation and we certainly know that the likelihood of people reporting that does have gender dynamics,” he added.