Iran’s Khamenei blames ‘cowardly’ US for pause in nuclear talks 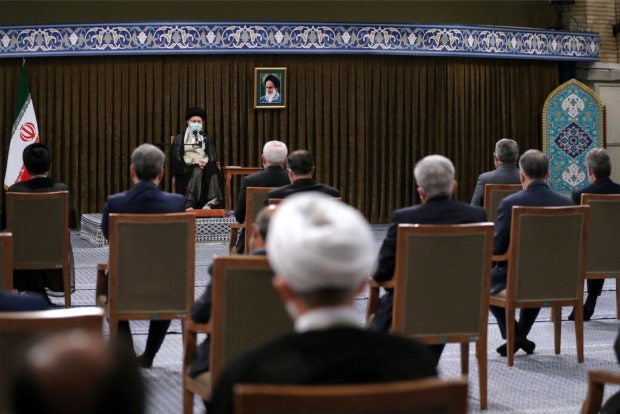 DUBAI — Iran’s supreme leader on Wednesday declared Tehran would not accept Washington’s “stubborn” demands in talks to revive a 2015 nuclear deal and said the United States had failed to guarantee that it would never abandon the pact again.

“They once violated the nuclear deal at no cost by exiting it. Now they explicitly say that they cannot give guarantees that it would not happen again.”

A U.S. State Department spokesperson said in a statement that President Joe Biden’s administration “has been sincere and steadfast in pursuing a path of meaningful diplomacy to achieve a mutual return to compliance” with the agreement.

Since April 9, Tehran and six world powers have been in talks to revive the nuclear pact ditched three years ago by then U.S. President Donald Trump, who argued it favored Iran.

The sixth round of indirect talks between Tehran and Washington adjourned on June 20, two days after hardline cleric Ebrahim Raisi was elected president of the Islamic Republic. Parties involved in the negotiations have yet to announce when the next round of negotiations will resume.

Like Khamenei, Raisi has backed the revival of the nuclear pact but officials have said that his government might adopt “a hardline” approach. Khamenei, not the president, has the last say on Iran’s state matters, including the nuclear policy.

Iranian and Western officials have said significant gaps remained to reinstate the deal, under which Iran agreed to curb its nuclear program to make it harder to obtain fissile material for a weapon in return for relief from tough sanctions. Iran says it has never sought nuclear weapons and never would.

Harsh sanctions reimposed by Trump since 2018 have prompted Tehran to violate the deal’s limits. However, Tehran says its nuclear steps are reversible if Washington lifts all sanctions.

Biden seeks to reinstate and eventually broaden the pact to put more limits on Iran’s nuclear work and its missile development and constrain its regional activities.

Khamenei again flatly rejected adding any other issues to the deal.

“In the recent nuclear talks, the Americans staunchly insisted on their obstinate stance. When making promises and on paper they say they will remove sanctions, but in practice they have not and they will not,” Khamenei said.

Khamenei said Washington is “stubborn” and insists on adding a sentence to the existing nuclear deal.

“By adding this sentence, they want to provide an excuse for their further interventions on the nuclear deal and (Iran’s) missile work and regional issues,” Khamenei said. “Then if we refuse to discuss those issues, Americans will accuse Iran of violating the nuclear deal and they will say the agreement is over.”