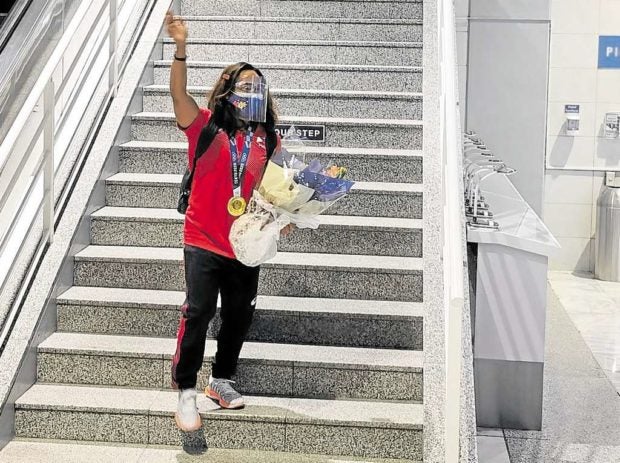 GOLDEN GIRL IS HOME Olympic gold medalist Hidilyn Diaz arrives at Ninoy Aquino International Airport on Wednesday night without much fanfare due to pandemic restrictions, before proceeding to a hotel for the mandatory quarantine. —CONTRIBUTED PHOTO

MANILA, Philippines — President Rodrigo Duterte extended his congratulations to Olympic weightlifting champion Hidilyn Diaz in a video call on Wednesday night as she and her team were quarantined at a Pasay City hotel upon arrival from Tokyo.

If not for the pandemic, the 30-year-old Diaz would have been mobbed by cheering crowds at Ninoy Aquino International Airport for ending the country’s 97-year quest for an Olympic gold, but the homecoming went without much fanfare, with media coverage severely restricted.

There were only members of the Philippine Air Force (PAF) lining up outside the arrival area, waving Philippine flags to welcome Sergeant Diaz, whom PAF chief Lt. Gen. Allen Paredes promoted to staff sergeant on Tuesday. In 2016, she also received a spot promotion for bringing home an Olympic silver from Rio de Janeiro.

Diaz will be staying at Sofitel Hotel in Pasay for a weeklong quarantine.

In his video call to Diaz, Duterte, who was also presiding over a Cabinet meeting, said: “Your achievement is the achievement of the Philippine nation. So we are extremely proud, we cannot express even in words. We should really be shouting ‘Alleluia!’”

“Thank you for patience. I hope the years of toil, the years of disappointment, the years that didn’t go well in the past, just forget them,” the president added.

In 2019, Malacañang tagged Diaz among the public figures who were allegedly part of a plot to destabilize the Duterte administration. Then presidential spokesperson Salvador Panelo presented a so-called “matrix” of the plotters to the media, but the allegations went largely unsubstantiated.

P3M from his pocket

But on Wednesday, Duterte said: “You already have the gold. Gold is gold. And it would be good for you to let bygones be bygones and dwell solely on your victory together with your family and, of course, with the nation.”

Aside from the P10-million reward due to Diaz under the law, the president also said the athlete, being an Air Force officer, would be given a fully furnished house and lot in her hometown of Zamboanga City, in a government housing project for the military and their families.

Duterte also said that out of his own pocket, he would give Diaz P3 million, which she can pick up at the Palace anytime at her convenience.

“Over and above these monetary considerations, it’s always the honor that you brought to the country that counts most,” the president said.

He added: “Put your life in order you’ve been blessed by God. This [amount] is not big, but it is also not small. This will go a long way to help your family. You know the struggle of life is a long, long process. You are already a celebrity, [your fame] is a political stock, so keep note of that. One day you’d want also to maybe help the country in some other way, other than being a soldier.”

Duterte also said Diaz will be conferred the Presidential Medal of Merit in a future ceremony.

Diaz thanked the president repeatedly during their conversation.

At the House of Representatives, 10 resolutions honoring Diaz have been filed, while a fundraiser for her and other national athletes has so far reached P4 million in pledges from at least 40 congressmen.

In Zamboanga City, aspiring weightlifters who said they were inspired by Diaz eagerly awaited her return.

“My heart exploded with pride, we cried with happiness,” said Jane Linete Hipolito, 19, who witnessed her idol’s feat online.

“If she was able to make it, we can also do the same,” said the criminology student, who recently brought home a silver medal from a competition in Indonesia.

Many local youths awed by Diaz’s 2016 silver finish have trained in the gym that bears her name and was built from her earnings after Rio.

The gym in Mampang village has accepted about 40 trainees since opening in 2017.

“We are very grateful that she put up a decent gym where we can regularly practice,” said Rosegie Ramos, 17, who now trains there together with her sister Rose Jean, 15.

“We hope to follow in her footsteps,” Ramos said.