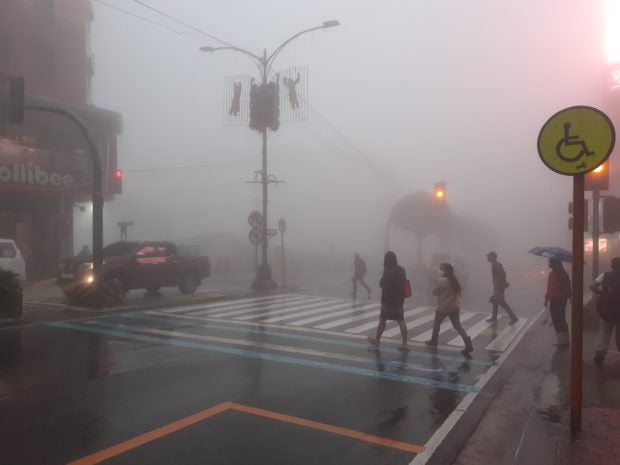 Baguio City continues to experience inclement weather due to the torrential rains spawned by the prolonged southwest monsoon. (Photo by Allan Macatuno)

At least 58 families were evacuated to safety while 29 houses were reportedly damaged in this city due to the prolonged rainfall, according to the city disaster risk reduction and management office (CDRRMO).

The heavy downpour also caused 15 incidents of landslides that damaged roads and bridges in the Cordillera region.

Data from the weather bureau here showed that the biggest volume of rain recorded in the city this monsoon season was 214.6 millimeters, recorded from July 22 to July 23.

A taxi passenger pinned by a fallen tree and an electric pole on Kennon Road on July 23 was the only fatality recorded related to the bad weather in the region. The victim was identified as Esmeralda Suriaga, 39, a call center worker.

The heavy rains, which have been pouring for eight days now, damaged P9.6 million worth of private property in Baguio, and an even bigger damage estimate of P16 million for public infrastructure, like roads, said CDRRMO officer Louie Glenn Lardizabal during a Wednesday briefing.

Lardizabal said the latest erosion in the city destroyed a section of Leonard Wood Road, which leads to the presidential Mansion and the Mines View Park. A lane of this section remained passable on Wednesday.

The rest of the Cordillera recorded at least P1.48 million worth of agriculture damage, affecting 1,129 hectares of farmlands, according to estimates from the region’s disaster response officers.

In nearby La Trinidad town, Benguet province, work at the town hall was also suspended starting 1 p.m. due to the intense rains and threat of widespread flooding.

Prolonged rains also damaged P94 million worth of crops and infrastructure in Bulacan, according to the provincial disaster risk reduction and management office on Wednesday.

At least 864 ha of rice farms and 489 ha of fishponds were destroyed by the widespread flooding in the province.

At least 3,000 residents of low-lying villages in the province were also displaced by the rains. Most of them live in the towns of Hagonoy, Paombong, Bulakan, Calumpit, Guiguinto, Plaridel, Bocaue, Obando, Norzagaray, Marilao and the City of Meycauayan.