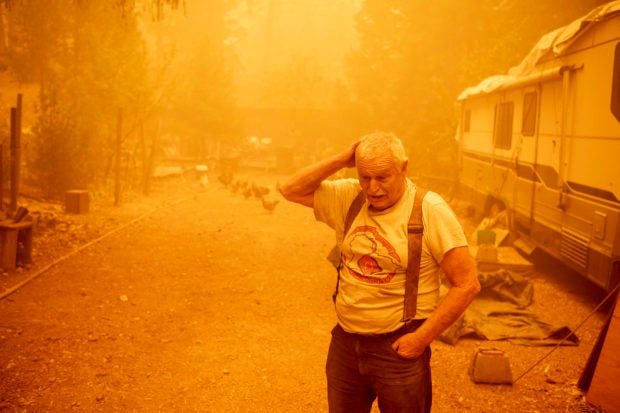 Resident Jon Cappleman prepares to defend his home during the Dixie fire in Twain, California on July 24, 2021. AFP

TWAIN, United States — Even as dense smoke from an enormous wildfire blows closer to Jon Cappleman’s home in rural northern California, the 60-something man rebuffs calls to evacuate.

“A lot of people think we’re foolish,” he says.

But if it comes down to it, Cappleman has a plan: he will fight the flames of the Dixie Fire himself.

Cappleman and his wife, whose home lies nestled in a pine forest near the town of Twain, hope they have thought of everything, down to the minute details.

For several days, they have used a pump and blue pipes to siphon water from a nearby creek in an effort to keep the ground around their house damp.

And Cappleman and his wife have spent all year keeping the surrounding area clear of flammable brush. Their goats take care of the spots they have missed.

“It’s a simple operation, but it works,” Cappleman, wearing a black baseball cap with an American flag on the front, says of their efforts.

Dixie is the eighth major fire Cappleman has faced since moving to this valley in 1982, calling it “the largest fire I’ve seen in my life.”

But he dismisses the idea that worsening fire seasons could have anything to do with global warming.

“I don’t think climate change has anything to do with this,” he says, instead blaming the fires on “too thick” forests.

A large tree damaged by the flames has just collapsed, which Cappleman says has been a regular occurrence.

He becomes slightly nervous as he inspects the trees around his property, which has not had power in three days.

“I’ve had 25 hours of sleep in a week,” he said, lighting a cigarette.

“It’s been quite nerve-wracking.”

‘Safety of your family’

Despite evacuation orders throughout the northern part of the state, Cappleman says he will not leave.

“You don’t leave the safety of your family in the hands of strangers,” he says.

Plus, it would be impossible to bring along the couple’s five turkeys, 30 chickens, 10 goats and six cats he explains.

The Dixie Fire has taken on a more uncertain path since it first sparked in mid-July. Its circumference stretches at least 82 miles (130 kilometers) around and has so far burned more than 197,000 acres.

There are six fire trucks stationed at the border of Cappleman’s 12-acre property, watching the blaze’s progression.

“We have a fire behind us on the hillside that could potentially impact these homes,” according to San Bernardino County fire Battalion Chief Jason Serrano.

“But we have those identified and we’ll be able to notify them in advance for an emergency evacuation.”

A group of firefighters approach Cappleman to take a look at his property.

He shows them around, obviously proud of his logistics operation.

But the firefighters point out the danger of an open-air storage shed just a few meters away, littered with old bicycles, cables, and other trash.

“I feel embarrassed that this is such a mess,” Cappleman responds. “This is a fire danger.”