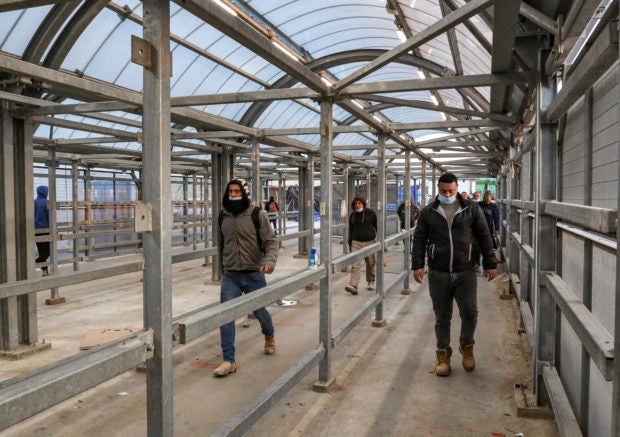 Palestinians go through the Israeli checkpoint of Mitar near Hebron in the occupied West Bank on March 1, 2021 as they cross into Israel to reach their workplaces. AFP FILE PHOTO

JERUSALEM — Israel announced Wednesday it is to issue 16,000 more permits for Palestinians from the occupied West Bank to work in its construction and hotel industries, taking the total to over 100,000.

“Israel intends to increase by 15,000 workers the quota of Palestinian residents of Judea and Samaria (the southern and northern West Bank) working in the field of construction,” the Israeli military body responsible for civil affairs in the occupied Palestinian territories, COGAT, said.

Another 1,000 permits will be issued to Palestinians working in Israeli hotels, it added.

The new permits will bring the number of Palestinians allowed to work in Israel to 106,000, with another 30,000 Palestinians authorized to work in Jewish settlements in the West Bank, a security official who spoke on condition of anonymity told AFP.

The announcement followed discussions between Israeli Defense Minister Benny Gantz and Palestinian president Mahmud Abbas. The Israeli government is expected to approve it next week, the security source said, adding: “We want to apply it as fast as possible. It’s in the interest of both sides.”

Jobs in Israel offer higher wages than those in Palestinian-administered areas of the West Bank but Palestinians complain they do not get paid as much as their Israeli counterparts or enjoy similar labor protections.

The head of COGAT, Major General Rassan Alian, said the additional work permits “will strengthen the Israeli and Palestinian economies, and will largely contribute to the security stability in the area of Judea and Samaria”.

No Palestinian residents of the Gaza Strip are currently permitted to work in Israel, the security official said.

The Covid-19 pandemic prompted Israel to suspend the 7,000 permits previously granted to workers from the impoverished territory of some two million people which has been under Israeli blockade since 2007.