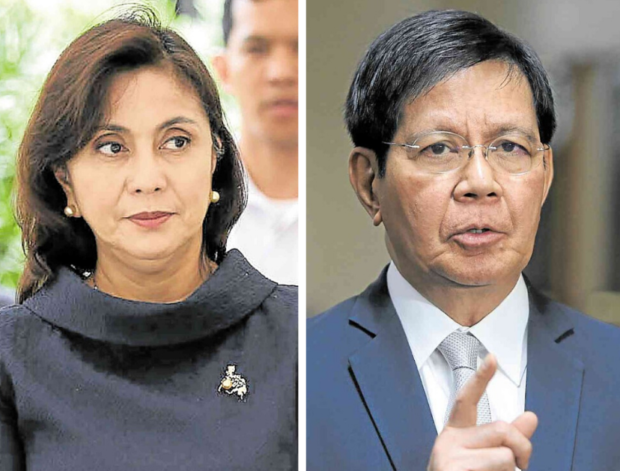 MANILA, Philippines — Senator Panfilo Lacson on Wednesday disclosed that he and running mate, Senate President Vicente Sotto III, had earlier sat down with Vice President Leni Robredo ahead of the 2022 national elections.

(Yes, we sat down—together with the Senate President—with Vice President Leni. At the time, she was accompanied by former Sen. Bam Aquino.)

(I just can’t divulge what we talked about because I have no authority from them to disclose. But what I can say is we talked.)

Lacson was asked about Senator Francis Pangilinan’s earlier statement that the Liberal Party is reaching out to him and other personalities in a bid to bring together the “broadest unity possible” in the 2022 elections.

Pangilinan is the president of the Liberal Party, while Robredo serves as its chairman.

Pressed further if these talks will lead to an alliance between the opposition and the Lacson-Sotto tandem, Lacson just said: “Basta nag-usap na kami [We talked].”

According to Robredo’s spokesperson, the meeting was part of the vice president’s “commitment to forge the broadest possible unity among groups and individuals seeking change in 2022.”

In a message to reporters, Pangilinan said he helped arrange the meeting between Lacson, Sotto and Robredo in coordination with the vice president’s office.

“As VP Leni said several weeks ago, the unity of all those who share a common belief in providing genuine solutions to the country’s problems is key come 2022 if we are to put the country on the right track towards succeeding in reaching the twin goals of defeating COVID and achieving economic recovery,” Pangilinan added.

Aquino also confirmed the meeting, saying their discussion covered the current situation of the country and what type of leadership is needed in order to overcome the challenges the nation is facing today.

Lacson and Sotto were the first to announce their electoral bid for the 2022 polls. Lacson will be gunning for the presidency, with Sotto joining the vice presidential race.

They seek to be the public’s “alternative” for the elections, saying they are neither pro-administration or the opposition.