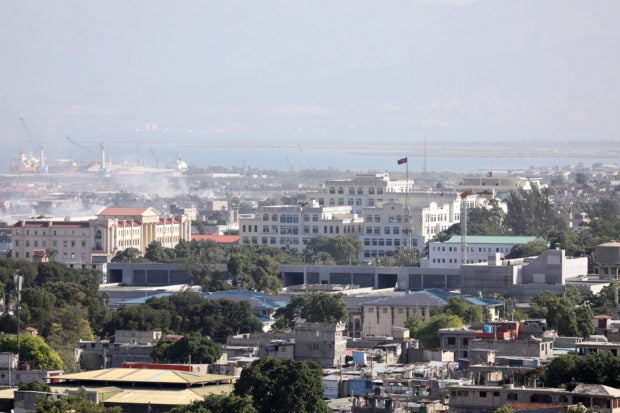 FILE PHOTO: A view of the port and the area around Champs de Mar, near the presidential palace, after Haiti’s President Jovenel Moise was shot dead by unidentified attackers in his private residence, in Port-au-Prince, Haiti July 7, 2021. REUTERS/Valerie Baeriswyl

PORT-AU-PRINCE — A top security official of slain Haitian President Jovenel Moise was arrested by police on suspicion of involvement in the assassination plot, his lawyer said on Tuesday, as another aide’s apparent account of the event was leaked on social media.

Presidential Security Coordinator Jean Laguel Civil was arrested on Monday, lawyer Reynold Georges told Reuters, nearly three weeks after Moise was killed on July 7 in the middle of the night at his private residence in Port-au-Prince by a group of more than 20 mostly Colombian mercenaries.

On Tuesday, a July 10 memo signed by Herard setting out the events of the assassination night was leaked on social media. Reuters could not immediately confirm its authenticity.

In the three-page document, Herard said he had received a call for help from Moise at 1:39 a.m. on July 7, whereupon he made for the president’s residence and ordered reinforcements.

Herard noted he received word of “many detonations” near Moise’s home and advanced on it with other officials. Near the entrance they were confronted by men dressed in black who ordered them to retreat, saying they were part of an operation by the U.S. Drug Enforcement Administration (DEA), he added.

Due to the fact his group was outnumbered and concerned that the men might have the president, Herard’s group retreated. They began planning an assault on their adversaries after learning just after 3 a.m. that the president was dead, he added.

In the ensuing battle on the afternoon of July 7, three Colombians were killed, Herard said, also noting in the memo that three police hostages were freed.

Many questions remain unanswered over who was behind the assassination and how the killers were able to gain access to the president’s home.

“The real culprits are those who gave the authorization to these Colombians to enter Haiti; police should arrest them,” he said.

The U.S. Federal Bureau of Investigation conducted a raid linked to Moise’s assassination in a gated community in Florida, a spokesperson for the agency confirmed on Tuesday after media reports about the incident.

“The FBI and (Homeland Security) are conducting court-ordered law enforcement activity in the vicinity of location. The affidavit in support of the search warrant has been sealed by the court,” an FBI spokesperson told Reuters in a statement, without giving further details.

Read Next
Killing of 2 activists hours before SONA condemned
EDITORS' PICK
Metro Manila’s COVID-19 cases on downward trend, but surge not over — OCTA
Palace warns sugar hoarders after raid on Pampanga warehouse
House energy committee chair Arroyo bats for cheap electricity
Unleash the photographer in you this World Photography Day with vivo smartphones
Look Through: The fate of impounded stray dogs
What to watch out for when selecting a video surveillance solution
MOST READ
Man abducted in Batangas gasoline station, found dead in Quezon
Nica del Rosario to wed partner in Australia
LOOK: Miel Pangilinan dazzles in glittery pre-debut shoot
Vice Ganda dismisses rumors he broke up with Ion Perez: ‘Masaya kami’
Don't miss out on the latest news and information.