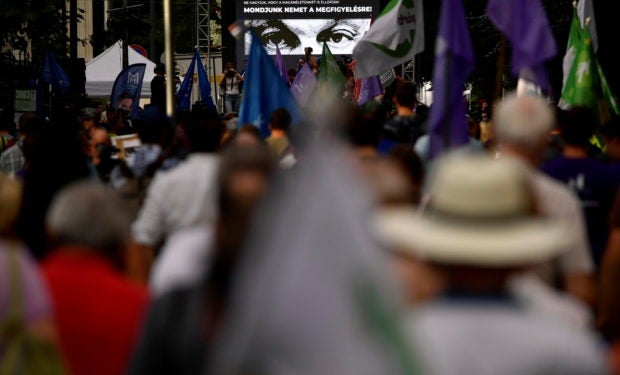 Participants walk in front of a poster showing Hungary’s Prime Minister Viktor Orban reading: “Do you want me to steal our privacy? We say no to your observation!” during a protest against the Hungarian government for using Pegasus spyware to monitor journalists, opposition leaders and activists in Budapest, Hungary, July 26, 2021. REUTERS

BUDAPEST — About 1,000 Hungarians protested on Monday over allegations that the government used Israeli-made Pegasus spyware for illegal surveillance of public figures in Hungary, drawing comparisons with the country’s communist past.

Protesters gathered at the House of Terror Museum in the capital, Budapest, which commemorates victims of Nazism and Communism, and marched to the headquarters of the governing Fidesz party.

“This (allegations of illegal surveillance) was the last straw for me,” said one protester, Marcell Csupor. “This reminds me of communist systems, and shows that the country is breaking away from the West and drifting towards the East.”

The government, which is at odds with many other European Union member states over rule-of-law and democracy issues, has not commented on the allegations beyond saying Hungary’s intelligence-gathering is conducted lawfully.

A report by a group of 17 international media organizations and Amnesty International this month said the Pegasus spyware, made and licensed by Israeli company NSO, was used in hacking and attempts to hack smartphones belonging to journalists, human rights activists and government officials in several countries.

Direkt36, the Hungarian partner in the group of media outlets, said those targeted for surveillance included journalists, businessmen, lawyers and people critical of the Hungarian government.

Hungarian prosecutors have launched an investigation into multiple complaints received since the reports.

NSO has said its product was intended only for use by vetted government intelligence and law enforcement agencies to fight terrorism and crime.

In Hungary, which was ruled by communists for four decades after World War Two, the minister of justice approves surveillance in matters of national security.

Miklos Hajnal, a member of the opposition Momentum party which organized the protest, called the Pegasus case the biggest scandal in Hungary since the transition to democracy in 1990.

“This is not acceptable in a country where people know how the socialist regime used to work,” he said. “There is a reason for the existence of security services, but it cannot simply be to cling to power.”