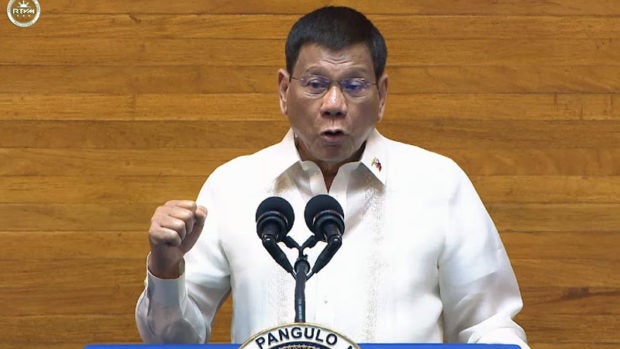 MANILA, Philippines — Malacañang on Tuesday said President Duterte was merely expressing his frustration when he suggested that his successor should declare martial law to rid government of corruption.

Duterte said this during his final State of the Nation Address (Sona) on Monday, reiterating what he previously said that nobody can stop corruption “unless we overturn the government completely,” and that martial law should be in place “to change everybody in the system.”

(The President only highlighted that corruption is really embedded in the system. If you don’t remove everyone in government, it might not stop.)

(It’s an expression of frustration because he wants to clean the government but he could not do it in six years time. But the meaning should not be taken literally that a martial law is needed for that.)

Under the 1987 Constitution, the President may only proclaim martial law in case of foreign invasion and rebellion when public safety requires it.

Duterte has repeatedly expressed frustration with corruption, admitting that it is “impossible” to eradicate it.