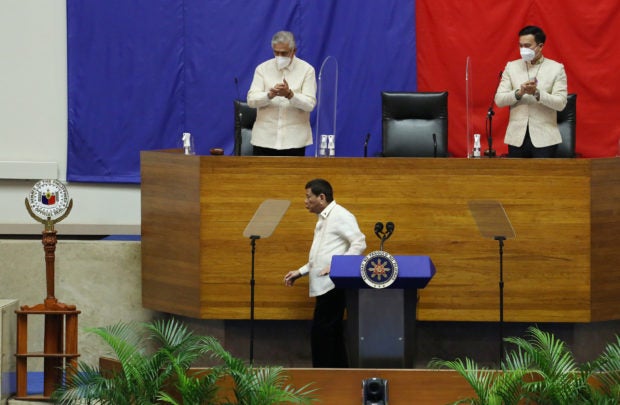 DIGRESSIONS The President’s speech lasted 2 hours and 45 minutes and was applauded about 90 times, including the many ad-libbed parts. —NIÑO JESUS ORBETA

MANILA, Philippines — Acknowledging the social and economic damage caused by the pandemic, President Rodrigo Duterte on Monday called on Congress to pass important pieces of legislation in the last months of his term to control the spread of COVID-19 and address the various socioeconomic needs of Filipinos.

Speaking at the joint session of Congress for his final State of the Nation Address, the President specifically mentioned the proposed bills seeking to amend the Foreign Investments Act, Public Service Act and Retail Trade Liberalization Act, measures designed to open up more sectors to foreign investors and generate employment.

He said he was also leaving it up to the National Employment Recovery Strategy task force that he created last month to draw up a master plan to reverse rising unemployment after millions of jobs were lost due to the lockdowns imposed to curb the spread of the virus.

He likewise promised to assist the private sector, particularly the struggling small and medium entrepreneurs, get back to the vibrancy of the economy before the health crisis.

The President also appealed to Congress to pass a law creating the Department of Migrant Workers and Overseas Filipinos to respond quickly to the concerns of some 10 million Filipinos working abroad.

To speed up government transactions not only during the pandemic but in the years to come, Mr. Duterte also called on lawmakers to enact an “E-Governance Act” that would cut red tape and bring government processes to the digital age.

To ensure that the country would be ready to respond better to natural and man-made disasters, he also called on Congress to pass pending bills on the creation of the Department of Disaster Resilience and Emergency Management and the modernization of the country’s fire protection services.

He said there was also a need to boost the country’s future response to emerging infectious diseases by passing laws that would create a center for disease prevention and control as well as virology and vaccine institute.

“However poor we are, I think the Filipinos, given the proper support, I am sure that the Filipino brain can also make vaccines in the future,” he said.

The President also asked Congress to pass a unified system for the separation, retirement and pension benefits of military and uniformed personnel to maintain government fiscal flexibility and provide adequate benefits and remuneration to the men and women in uniform. This, he said, should apply only to the new entrants of the uniformed services.

Digressions and ad libs perked up listeners’ interest while the President enumerated his administration’s achievements for the past years and his thoughts on what more should be done.

He said he never imagined, when he assumed office, that he would be judged not only on how he made good on his campaign promises on illegal drugs, crime and corruption, but also on how his administration responded to the pandemic.

The President instructed the National Task Force Against COVID-19 and local government authorities to make sure that Filipinos who want to get vaccinated do not have to endure long queues on flooded streets, recounting what he saw on television of people lining up to get vaccinated in the early morning while being battered by rains.

When he spoke about his foreign policy, the President emphasized the country’s independent stand in promoting and protecting “core national interests” when dealing with various countries.

However, he said confronting China over the issue could provoke a war that the Philippines was not prepared for. This, he said was one of the reasons why he rejected calls to challenge China. The other was that Manila owed Beijing a debt of gratitude because it was the first to donate much-needed COVID-19 vaccines to the Philippines.

Mr. Duterte also admitted that he committed an act of bad faith when he recounted the real story about the return of the Balangiga bells, which were taken as war booty from Samar by American soldiers during the Philippine-American War.

The President said he demanded the return of the bells as a condition for his making a trip to the United States, when in truth, he really had no plans to visit.