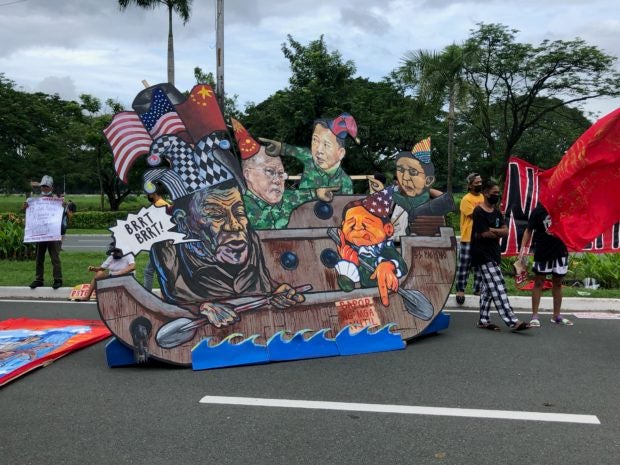 Different groups around the country staged protests, both in online portals or in the streets, on Monday to decry what they described as President Rodrigo Duterte’s failed promises as he delivered his sixth and last State of the Nation Address (Sona).

In Davao City, the President’s hometown, militant groups launched five-minute picket protests to remind Duterte of the promises he failed to keep.

“We want to ask him about the promises that he made, including his promise to end labor contractualization, that was the reason we supported him [in the 2016 elections]. Instead, what we got is Red-tagging and the unabated killing of labor leaders, union members, and other activists,” Dizon said.

More than 50 labor leaders and unionists have been killed in different parts of the country since Duterte took power in 2016, he said. Aside from failing to fulfill his campaign promise to workers, the president also vetoed the bill that would have provided security of tenure to workers, Dizon added.

After the group made a five-minute speech at each stop, they dispersed and reassembled on Acacia Street where they wrapped up their protest before policemen arrived.

In Iloilo province, around 150 members of progressive organizations, led by Bagong Alyansang Makabayan (Bayan) in Panay, denounced the administration’s failure to effectively address the impact of the pandemic in the country.

“Despite the many problems brought by the economic and health crisis, Mr. Duterte and his ilk are rushing in preparation for the upcoming 2022 presidential elections in a desperate attempt to extend his power and evade accountability for his gross neglect of the Filipino [people]’s sovereign and democratic rights,” Bryan Bosque, Bayan-Panay deputy spokesperson said.

The groups held pocket protest actions amid heightened community quarantine restrictions in Iloilo City, Roxas City in Capiz, and the capital town of Kalibo in Aklan.

“The legacy of the Duterte administration is to spread lies but it cannot cover up the 9.5-percent decline in our gross domestic product for 2020, record-high inflation rate and unemployment rate and poverty, plus the thousands of human rights violations,” Bosque said.

In Cebu City, Jaime Paglinawan, Bayan-Central Visayas chair, said: “We need to express our sentiments against the many promises which he [Duterte] failed to deliver in his five years in office.”

Among the unfulfilled promises, he said, were ending contractualization in the country, increasing workers’ pay, and a poor land reform program.

“His formula for economic recovery is a failure. COVID-19 loans may also spur the debt crisis,” she said.

In Central Luzon, fisherman Bobby Roldan from Masinloc, Zambales, slammed Duterte’s “deliberate neglect” to defend Philippine sovereignty against China at the expense of the livelihood and fishing rights of Filipinos.

“Most of us have totally deserted the [Scarborough] shoal since we experienced harassment from the Chinese Coast Guard,” Roldan, also vice chair for Central Luzon of the fisherfolk group Pamalakaya, said.

In Baguio City, groups led by Cordillera Peoples Alliance and Tongtongan ti Umili held an online protest called “WakaSona” to present what they described as the “real situation” of the country in terms of the unfulfilled promises of Duterte and the government’s handling of the pandemic.

In the Ilocos region, several groups also mounted a virtual protest, assailing the state of livelihood, health, sovereignty, and human rights in the country amid the pandemic.

According to Ilocos Human Rights Alliance, “disinformation” and “fake news” remained as a “threat against legitimate voices among government critics and activists in the Ilocos region.”

In the Bicol Region, activists staged protests in the cities of Legazpi, Sorsogon, and Naga to express discontent with the administration’s pandemic response and to demand that Duterte be made accountable for the attack on activists.

Militant groups staged “Kadena Bicolandia,” a simultaneous protest action in the region, to denounce the administration’s failure to address economic, social, and health issues that he promised to accomplish during his term, said Jen Nagrampa, Bayan Bicol chair.

In Naga City, youth activists burned an effigy called “Duterte Kupit-Tuko,” which depicted Duterte as a gecko holding tightly onto the back of a chair marked with the seal of the president.