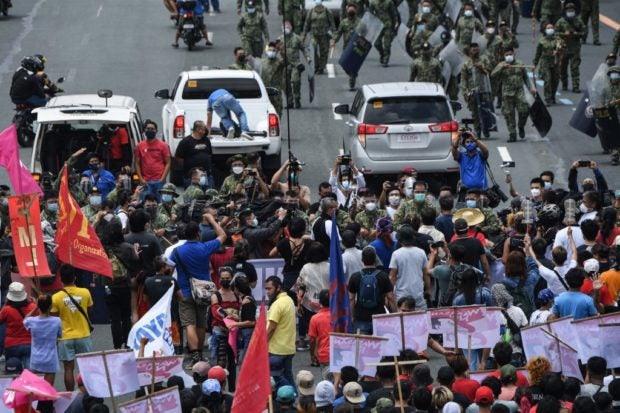 Anti-riot policemen (top) block protesters (bottom) trying to march down a motorway on their way to the Congress to coincide with the president’s annual state of the nation address expected later in the day, in suburban Manila on July 26, 2021. (Photo by TED ALJIBE / AFP)

There were “no major untoward incidents or arrests” made throughout the day, he said.

Some 1,000 protesters assembled at University of Diliman in the morning, growing to at least 3,000 by early afternoon, the PNP said.

Another group of at least 200 people were monitored near the Commission on Human Rights office on Commonwealth Avenue before noon.

No visible attempts by these groups to march further to Batasang Pambansa, site of Duterte’s SONA, were observed until they eventually dispersed peacefully at 4p.m., the PNP said.