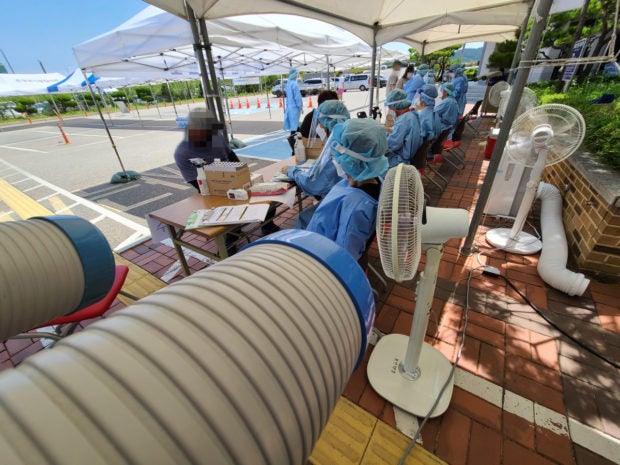 Medical workers administer COVID-19 tests to visitors at a screening facility in Gangwon Province on Sunday. Yonhap via The Korea Herald/Asia News Network

SEOUL — Reporting over 1,000 new COVID-19 cases for the 19th consecutive day Sunday, South Korea is struggling to contain a stubborn fourth wave of infections even with the stiffest social distancing measures in place.

The number of newly confirmed cases in the 24 hours ending Saturday at midnight was 1,487, marking the highest daily tally reported on a weekend since the coronavirus outbreak started early last year.

Due to a surge in the number of infections in the Greater Seoul area earlier this month, Seoul, Gyeonggi Province and Incheon have been under the tightest social distancing rules since July 12.

Despite the Level 4 measures, banning gatherings of more than two people after 6 p.m. and forcing restaurants and cafes to close after 10 p.m., the Greater Seoul area has struggled to curb the spread of the virus.

Last week, the government announced that the tough distancing guidelines in the capital region would be extended for two more weeks through Aug. 8.

“The goal of the extension of social distancing is to reverse the increasing trend (in the number of infection cases in the Greater Seoul area) and bring down the figure to under Level 3 standards,” Lee Ki-il, a senior official from the Ministry of Health and Welfare, said in a briefing Friday.

“If these goals are not achieved within two weeks, we will consider stronger quarantine measures such as prohibiting gatherings at facilities and tightening limits on operating hours.”

In the meantime, the health authorities are concerned about the numbers of infections being reported outside the capital.

As of Saturday, more than 30 percent of new infections had been reported outside the capital region for eight days in a row. The 546 cases diagnosed outside the Greater Seoul area on Saturday made up almost 40 percent of the nationwide total.

The central government announced that all regions outside the Greater Seoul area would be placed under Level 3 distancing rules from Tuesday through Aug 8.

“The most worrisome thing as of late is the spread (of the coronavirus) outside the Greater Seoul area,” President Moon Jae-in said during a Central Disaster and Safety Countermeasure Headquarters meeting on Sunday.

Under Level 3 distancing measures, private gatherings of five people or more are prohibited while restaurants and cafes can only offer delivery or takeout services after 10 p.m.

However, local governments in communities with populations of no more than 100,000 can decide whether to implement Level 3 distancing measures, according to the Ministry of Health and Welfare.

With many on the move for summer vacation, some of the most popular travel destinations have implemented tougher social distancing measures to prevent the virus from spreading further. On July 19, the local government of Gangneung, a coastal city in Gangwon Province, was the first authority outside the capital region to apply Level 4 distancing guidelines.

According to the Korea Disease Control and Prevention Agency, approximately 86 percent of the 3.54 million people in that age group have made appointments to be vaccinated.

Of those receiving their jabs this week, people in the Greater Seoul area will get Pfizer’s vaccine whereas others will get Moderna’s vaccine.

People aged 55 to 59 who get coronavirus shots after this week will get either Pfizer’s vaccine or Moderna’s. Koreans do not get to choose which vaccine they receive.

As the current supply schedule for vaccines is subject to change, the health authorities plan to individually inform people of which vaccine they will get sometime in the week before their inoculation appointments.

For those aged 50 to 54, vaccination will begin Aug. 16. For people younger than 50, no vaccination schedule has been set yet.

“The opening period for (online vaccine) reservations is around mid-August and we will include the specific dates in the August plan.”