Duterte bares involvement of Customs in illegal importation of drugs 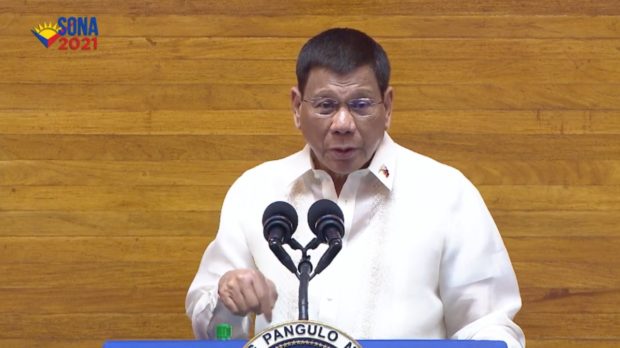 President Duterte makes a hand gesture during his final Sona.

MANILA, Philippines — President Rodrigo Duterte on Monday admitted he did not know he would fight his own government in his war against drugs, disclosing that the Bureau of Customs was involved in importing illegal drugs to the country.

“We are fighting a drug war that was being participated in the business by nine generals of the PNP. Yan ang masakit sa loob ko,” Duterte said in his final State of the Nation Address (Sona).

“I did not know that I was fighting my own government. Customs and everyone else was facilitating the importation of drugs,” he added.

Duterte said “almost a billion” worth of drugs are seized by the police while “about a thousand” Filipinos are arrested due to illegal drugs every day.

“And that is why I go crazy looking at the situation. They are still around. We do not have the laboratories now because nawala na sila at itong naiwan ngayon are doing the importation,” Duterte said.

It was not the first time for Duterte to admit having a hard time ending the problem of illegal drugs.

Even so, Malacañang has touted the drug war as “successful” and even expressed optimism that the drug-free Philippines is still possible before the President’s term ends in 2022.

But the drug war that catapulted Duterte to the presidency in 2016 also brought the Chief Executive before the International Criminal Court for allegedly committing crimes against humanity.

However, Duterte himself repeatedly said his government would never cooperate with the ICC probe.

Read Next
Duterte: When I said I will fight drugs in 6 months, I thought it was like in Davao
EDITORS' PICK
Legarda emphasizes role of ICC/IPs in nation building this IP month
PH still at bottom of COVID-19 economic resilience ranking
Work-From-Home is here to stay and requires reliable logistics
Renewal of driver’s license now requires taking LTO education seminar
Climate Change Commission and Nestlé PH to discover sustainability-focused solutions
TNT nears PBA crown after rout of Magnolia in Game 4
MOST READ
Drivers now required to take driver’s education upon license renewal – LTO
Don’t do that: Robredo to supporters calling to boycott restos supportive of Marcos
Bongbong Marcos camp eyeing Pacquiao, VisMin bets as VP options — Imee
OVP spox to Imee Marcos: Robredo is an extraordinary lawyer
Don't miss out on the latest news and information.