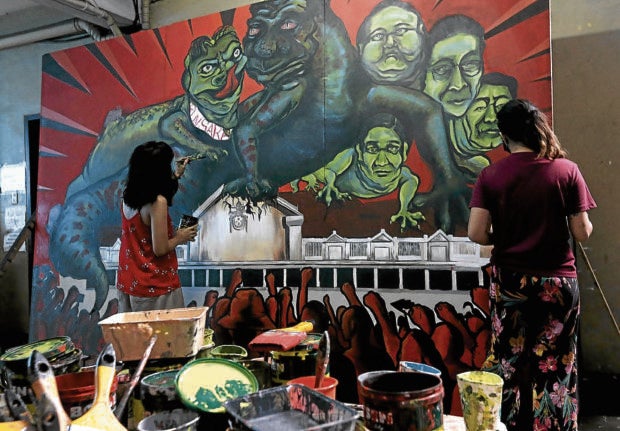 PREVIEW OF MONDAY’S PROTESTS Artists from Ugatlahi Artists Collective put the finishing touches on the 2D artwork depicting President Duterte as a gecko over his declaration to run for vice president in 2022 and stay in power. —RICHARD A. REYES

MANILA, Philippines — President Rodrigo  Duterte is expected to talk about his “legacy of change” and enumerate his administration’s achievements when he delivers today his sixth and last State of the Nation Address (Sona) before the joint session of Congress.

The Presidential Communications Operations Office (PCOO) has been busy the past weeks conducting a series of pre-Sona forums, featuring members of various Cabinet clusters, under the theme “Pamana ng Pagbabago” (Legacy of Change). It has also been churning out on social media statistics on what it termed were the achievements of Duterte.

One graphic, titled “Duterte Legacy,” claimed that 451 seaport and 214 airport projects, 5,950 bridges and 29,264 kilometers of roads were completed as of June 2021; 150,149 classrooms were constructed also as of June, and 1.62 million students were given free tuition in the past five years.

It added that 6 million Filipinos were lifted out of poverty as of 2018 based on data from the National Economic and Development Authority; 109.04 million Filipinos covered by Universal Health Care for the last five years, and 2 million individuals assisted by the government’s Malasakit Centers as of July 2021.

“Even if the pandemic affected our antipoverty efforts, the Duterte administration invested in pandemic response to give protection and security to the lives of all Filipinos,” the PCOO said, mentioning the Bayanihan to Heal as One Act, Bayanihan to Recover as One Act, Corporate Recovery and Tax Incentives for Enterprises Act, Financial Institutions Strategic Transfer Act, and the Social Amelioration Program.

The PCOO said that under Mr. Duterte, the country placed 25th in the HSBC survey on the best places to live and work in 2020, while Ninoy Aquino International Airport was adjudged the world’s most improved airport in 2018. It also noted the 65-percent approval rating and 55-percent trust rating that the President obtained in the April 2021 Publicus Asia Inc. survey.

In his online commentary program, Chief Presidential Legal Counsel Salvador Panelo said that with “determination,” the President largely fulfilled his vow to end illegal drugs and criminality in the country.

“Don’t minimize [this achievement] by saying drugs are still able to enter the country. Why not? The country has many points of entry. What you should look into is that when they (drugs) come in, we discover and intercept them. That’s what’s more important,” he said.

In the final PCOO-sponsored forum last week, Foreign Secretary Teodoro Locsin Jr. assured the public that there was no territory lost during the Duterte administration. He promised the public that the government would maintain a tight grip on every island of the nation even after Duterte’s term.

“We have not surrendered a single inch of territory. Not by word or deed have we weakened our right to everything in the West Philippine Sea,” Locsin said.

While the president is expected to give an update on the government’s roadmap to socioeconomic recovery from the effects of the COVID-19 pandemic, Cabinet officials declined to disclose the specific response plans the president would unveil in his Sona.

However, during the president’s televised meeting with Cabinet members in Malacañang on Saturday night, Finance Secretary Carlos Dominguez III said the government would have a budget of P45 billion for additional vaccines, such as booster shots, if so decided by health authorities.

Dominguez said the country was expected to receive this year 171 million vaccine doses, or more than enough for all Filipino adults.

“The money is already available for that. So there is no problem with the money for this year. By the end of this year, we will be able to vaccinate the entire adult population of the Philippines. Hopefully, everybody will agree to be vaccinated,” he said.

In terms of the government’s pandemic response funds, Dominguez said some P660 billion had been spent and the government agencies holding some P6 billion in unused funds have been asked to spend the money soon in accordance with the law.

The only pandemic-related number cited by the PCOO was the 653 COVID-19 facilities built as of July 2021.

While some rallies have been planned during the Sona, protesters in Metro Manila and areas in the western section of Luzon should ready their umbrellas for light to moderate rains and isolated thunderstorms on Monday afternoon to evening, brought by the southwest monsoon, locally known as “habagat.”

Cloudy skies would greet President Duterte’s final Sona, according to the weather outlook from the Philippine Atmospheric, Geophysical and Astronomical Services Administration.

—WITH A REPORT FROM JHESSET O. ENANO