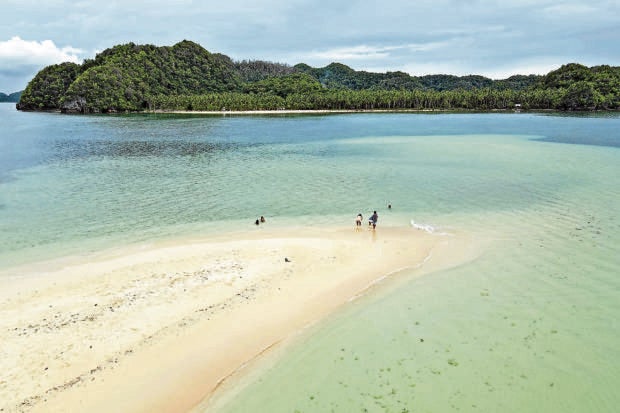 TOURIST HAVEN Tourists enjoy the turquoise water and the white sand beach in Kawhagan Island, just across another white sand beach of Pamomoan in the town of Del Carmen on Siargao Island, Surigao del Norte, in this photo taken in November 2020. — ERWIN M. MASCARIÑAS

BUTUAN CITY, Agusan del Norte, Philippines — The regional tourism office here expects tourist arrivals on Siargao Island to increase in the next few months despite the COVID-19 restrictions after Time Magazine named it one of the world’s 100 greatest places for 2021.

On July 20, Time Magazine published a compilation of what it considered the “World’s Greatest Places of 2021: 100 extraordinary destinations to explore.”

Only Siargao Island in the province of Surigao del Norte made it on the list among all the other top destinations in the Philippines.

According to Time Magazine, the third annual list of the World’s Greatest Places is a tribute to the people and businesses at the forefront of those industries who, amid extraordinary circumstances, found ways to adapt, build and innovate. It shines a light on ingenuity, creativity, revitalization and reopening of destinations across the world.

The list is based on solicited nominations from the magazine’s international network of correspondents and contributors, with an eye toward those offering new and exciting experiences.

Nelia Arina, regional director of the Department of Tourism in Caraga, said it was an honor to be recognized as the top destination in the Philippines. She believed that having Siargao Island included in the list would help the tourism economy of the region regain its footing.

“With the recognition that Siargao has been getting in the international tourism scene, we are hoping for a gradual increase in foreign tourist arrivals and even tourists from other parts of the country, as more people abroad and in the Philippines had been fully vaccinated and would be willing to take the RT-PCR (reverse transcription-polymerase chain reaction) test to go on vacation in Siargao,” Arina said.

The daily arrivals of tourists on Siargao Island from Manila and Cebu still increased amid stringent travel requirements in place, she added.

According to the municipal tourism office of Del Carmen, the most visited island on the Siargao group, they expect commercial flights at the town’s Sayak airport to increase from the current one flight a day to as many as four flights a day before July ends. Sayak airport takes in direct flights from Cebu and Metro Manila.

Don’t get too excited

“We hope that the increase in tourist arrivals on the island will also benefit our boat operators and other downstream industries affected by the pandemic,” said municipal tourism officer Lanie Lipio.

But Arina asked locals not to get too excited to receive tourists because of the dangers COVID-19 could bring to islanders.

“The island has a district hospital but we still lack the proper medical facilities,” she added.

Authorities in Siargao Island would still require RT-PCR tests from travelers coming to the island, including those who were already fully vaccinated.