According to its latest monitoring report, Cagayan de Oro’s new daily average of COVID-19 cases from July 18 to 24 has risen to 117. This is 109 percent higher than the past week’s 56 average cases. 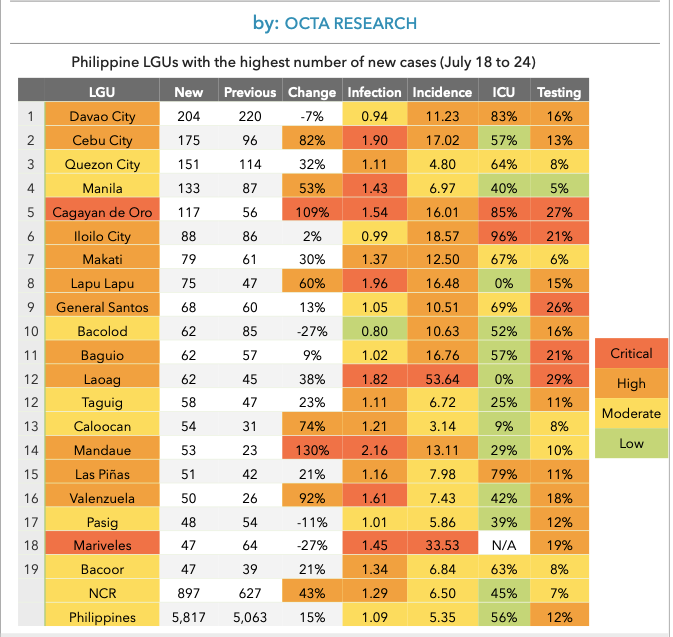 Apart from this, infection also rose to 1.54 percent, ICU utilization rate is at 85 percent, and 24 percent testing positivity rate.

On July 16, 16 cases of the Delta variant were reported by the Department of Health (DOH) of which five were detected in Cagayan de Oro City.

Meanwhile, a town in nearby Bukidnon is currently under modified enhanced community quarantine (MECQ) after health authorities learned that a returning overseas worker was infected with the COVID-19 Delta variant.

OCTA also showed that Davao City continues to lead the list of LGUs with the most number of reported cases of COVID-19. However, trends both in Davao City and General Santos in Mindanao slowed down after a recorded decrease in infection rate. The two cities remain tagged as “high risk” areas.

Meanwhile, from July 18 to 24, the entire Metro Manila recorded an average of 897 COVID-19 cases per day, a 43 percent increase from the previous week’s 627 cases. The reproduction number also increased to 1.29.

“The current trend in the NCR (National Capital Region) over the past week follows the trend from February 14 to 21, when a surge was in its early stages,” said OCTA.

The positivity rate in the Metro increased to 7 percent while hospital utilization and ICU utilization remain below 60 percent.

Elsewhere in Luzon, Laoag continues to be in a near-critical state, with critical levels of infection, incidence and positivity rate. In Mariveles, Bataan, the trend in new cases has slowed down, but the LGU continues to be classified as critical risk due to critical rates in infection and incidence.

Meanwhile, a “very high” increase in new cases was recorded in: Mandaue and Cagayan de Oro.

The total number of Delta variant cases in the country is at 64, according to the DOH.