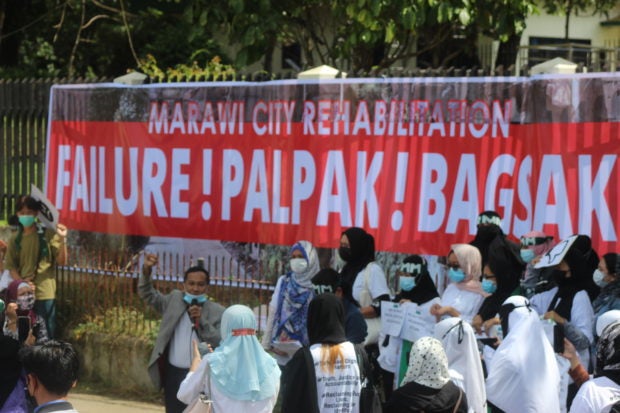 Maranao activists and groups of internally displaced persons display a tarpaulin banner announcing their verdict on how the Duterte administration fared in its promise of making Marawi rise again from the ashes of a five-month war in 2017 against Islamic State terrorists. PHOTO BY RYAN D. ROSAURO

MARAWI CITY — Displaced residents and civil society groups in Lanao del Sur have judged the administration of President Rodrigo Duterte as a “dismal failure” in rebuilding this war-torn city four years after the siege by Islamic State militants in 2017.

The ensuing five-month battle ruined the city’s main commercial district which also used to be Dansalan, a centuries-old settlement that would grow into today’s Marawi.

During the State of the Marawi Bakwit (Sombak) Address on Saturday, groups under the banner of the Reclaiming Marawi Movement (RMM) and the Marawi Advocacy Accompaniment (MAA) said the government’s Marawi rehabilitation program was a dismal failure because not a single displaced family was able to return to their former community and rebuild their lives in the so-called ground zero of the 2017 war.

“The ultimate test of (the success of) Marawi rehab is the safe and dignified return of the IDPs (internally displaced persons),” said Mindanao State University Prof. Tirmizy Abdullah, a MAA convener.

“They are showing the outsiders a new and beautiful Marawi but the reality is they are rebuilding the Islamic City the wrong way, unmindful of our culture, tradition and beliefs as a people. They are constructing large-scale infrastructures that the people of Marawi don’t actually need,” Abdullah added.

Government’s rehab program for the city is overseen and coordinated by the Task Force Bangon Marawi (TFBM). For about a year now, there have been massive construction activities in the city, mainly to restore public infrastructure.

Recently, TFBM said that the residents in four sectors of the so-called ‘most affected area’ of the 2017 war can start to rebuild their homes in October as common-use infrastructure, especially roads, will be done.

But in a statement, the RMM raised doubts about this prospect as TFBM required that families be able to present legal titles to the lands where they will rebuild their homes.

“In our view, the rehab effort is a dismal failure. For one, the government has backtracked on its promises and failed at consulting relevant stakeholders in planning and implementing the programs for rehabilitation. Until now, hundreds of Marawi IDPs remain in temporary shelter communities,” said Amenodin Cali, chair of Kalimudan sa Ranao Foundation and one of the MAA leaders.

As of June, the UN High Commissioner for Refugees counted 17,446 families still displaced due to the 2017 siege. Citing TFBM data, the agency said 4,166 are currently living in 13 transitory shelter sites.

Cali also said that thousands of families whose properties were lost during the siege have not received compensation until now.