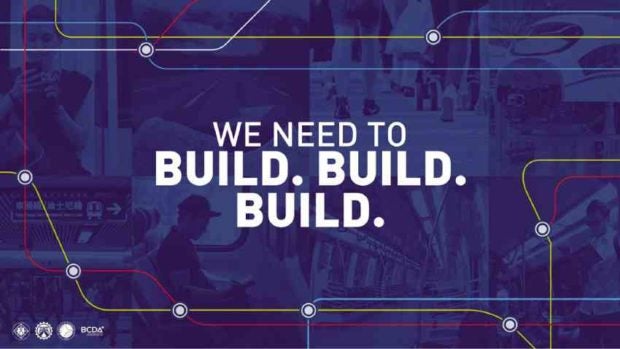 MANILA, Philippines — When President Rodrigo Duterte addressed the nation in 2017, he promised that the following years would be the “golden age of infrastructure” in the Philippines that would “enhance our mobility and connectivity.”

Filipinos were introduced to “Build, Build, Build” (BBB), the package of flagship infrastructure projects that the President vowed to deliver before leaving office. Pouring massive resources into the development of the archipelago’s network of highways, farm-to-market roads, bridges, railways, seaports and airports made sense as they would create jobs and enhance countryside development.

But how many of these projects had been “Built, Built, Built” with less than a year left before Duterte steps down from Malacañang?

In the president’s home region, the promised Mindanao Railway that aims to link the main southern island’s major cities and urban centers, has yet to leave the station more than four years after its launch.

Transportation Secretary Arthur Tugade said the government was still waiting for the shortlist of bidders for its design and construction from the Chinese government to start the first phase of the project that would connect Digos City to the cities of Davao and Panabo.

Tugade said his department was “quietly” working to make this dream a reality. “This will push through,” he recently told the Davao City Disaster Radio, referring to the P81.69-billion project funded by an official development assistance from China.

“Once we receive that shortlist, we will immediately start the procurement and construction, which we hope will be this year,” he said.

One of the 11 “high-impact” projects of the Department of Public Works and Highways (DPWH) in the Davao region caught everyone’s attention for its early completion—a 55-km network of bicycle lanes that connects Metro Davao’s residential areas to its main hubs. It was started on Feb. 21 this year and was finished in June.

Tugade said the P150-million project would help the public cope with the reduced passenger load of public transportation during the pandemic.

Not too far from Davao, the P1.09-billion upgrade of the General Santos City airport is now 96-percent complete and will be finished this year, making it capable of servicing inbound night flights, according to Joel Gavina, city manager of Civil Aviation Authority of the Philippines.

The upgrade includes a boarding bridge so that passengers and crew no longer have to walk under the sun or the rain, which they had to endure over the past 25 years, to get to and from their planes.

“You can be proud of the airport’s facelift,” Gavina told the Inquirer in a phone interview.

The Bohol-Panglao International Airport is the only completed BBB project of the 15 in the Visayas listed on the website of the National Economic and Development Authority (Neda).

The P7.8-billion project began in 2015 during the administration of the late President Benigno Aquino III. It started operation on Nov. 27, 2018.

Three of six major infrastructures classified as “in the process of completion” were started by the previous administration: the Jalaur River Multipurpose Project (JRMP) in Calinog town in Iloilo, the Cebu Bus Rapid Transit (BRT) system, and the Bacolod-Negros Occidental Economic Highway.

Considered the biggest ongoing project in the region and the biggest dam outside Luzon, the JRMP is set to be completed in 2023, according to the National Irrigation Administration.

The Panay-Guimaras-Negros bridge is back to the drawing board after its funding source, the Chinese government, backed out.

The International Container Terminal Services Inc. (ICTSI) has submitted an unsolicited proposal to the Philippine Ports Authority to develop the Iloilo Commercial Port Complex and the Port of Dumangas in Iloilo. The ICTSI invested at least P8.7 billion for these projects.

The NCICP in Consolacion town is expected to break ground on Aug. 16. The P9.96-billion project will be financed through a $172.64-million loan agreement between the Philippines and the Export-Import Bank of Korea.

The government will start partial operations of its first BRT system in Cebu by December. The P16.3-billion World Bank-funded project will be fully operational in 2023.

The Cebu-Cordova Bridge, known as the Cebu-Cordova Link Expressway, or third bridge, is 80 percent complete as of July. Once finished, the 8-km bridge, which connects Cebu with Mactan Island, will be the longest in the Philippines.

The Negros highway, which will pass by the Bacolod-Silay Airport, will provide an alternate route from southern to northern Negros Occidental.

It is set to be completed in December 2024, eight years after construction started in March 2016.

The Samar coastal road is 52.260 percent complete as of June 2021, according to the Northern Samar Second District Engineering Office (NSSDEO).

The P997.5-million project is funded through a loan from South Korea’s Korean Economic Development Cooperation Fund.

In Luzon, the Bicol International Airport (BIA) in Albay, which three presidents had listed as a flagship project, is set to be opened initially for domestic flights in December.

The BIA in Daraga town is envisioned as an international air hub that is projected to spur economic growth and boost tourism in the region.

Neda Bicol director Agnes Espinas Tolentino said 83 percent of civil works and 87 percent of overall physical work at the airport had been completed as of June.

The government has spent P3.9 billion on the BIA since 2009.

The extension of the South Luzon Expressway from Santo Tomas, Batangas, to Lucena City in Quezon province is ongoing.

In Central Luzon and the Ilocos regions, the Duterte administration’s big-ticket infrastructure projects involve railways and the expansion of expressways.

A P50-billion 71-km Subic-Clark railway will be funded by Chinese companies. It is a component of the PNR Luzon System Development Framework that will provide freight service between Subic Bay Freeport and Clark Freeport, and link Subic Port to Clark International Airport and other major economic hubs in Central Luzon, especially New Clark City.

In January this year, the Philippines and China signed the project’s commercial contract, making it the “highest funded government-to-government project between the two countries.”

Aside from the Subic-Clark Railway, a rail system will connect Clark to the City of Malolos in Bulacan and Manila.

The PNR Clark Phase 1 from Tutuban in Manila to Malolos was 46.68 percent complete as of June, according to Tugade.

This 39-km segment, to be finished in 2024, is part of the North-South Commuter Railway project conceptualized during the Ramos administration.

The proposed P175.7 billion Bataan-Cavite Interlink Bridge is expected to spur development in Bataan province and other parts of Central Luzon as well as neighboring cities in Metro Manila.

Bataan Gov. Albert Garcia told the Inquirer that the more than 32-km bridge would shorten the travel time between the two provinces from three hours to 30 minutes.

“This is a significant project that will benefit Bataan and Central Luzon because this will pave the way for more businesses to flourish,” said Garcia.

The DPWH opened this month portions of the 30-km Central Luzon Link Expressway between Tarlac City and Nueva Ecija.

In Northern Luzon, the last segment of the 88-km Tarlac-Pangasinan-La Union Expressway (TPLEx) was opened to motorists in July last year.

The expansion of TPLEx, a toll road operated by San Miguel Corp., was aimed at cutting an hour off the four-hour trip from Manila to Baguio City and other northern destinations.