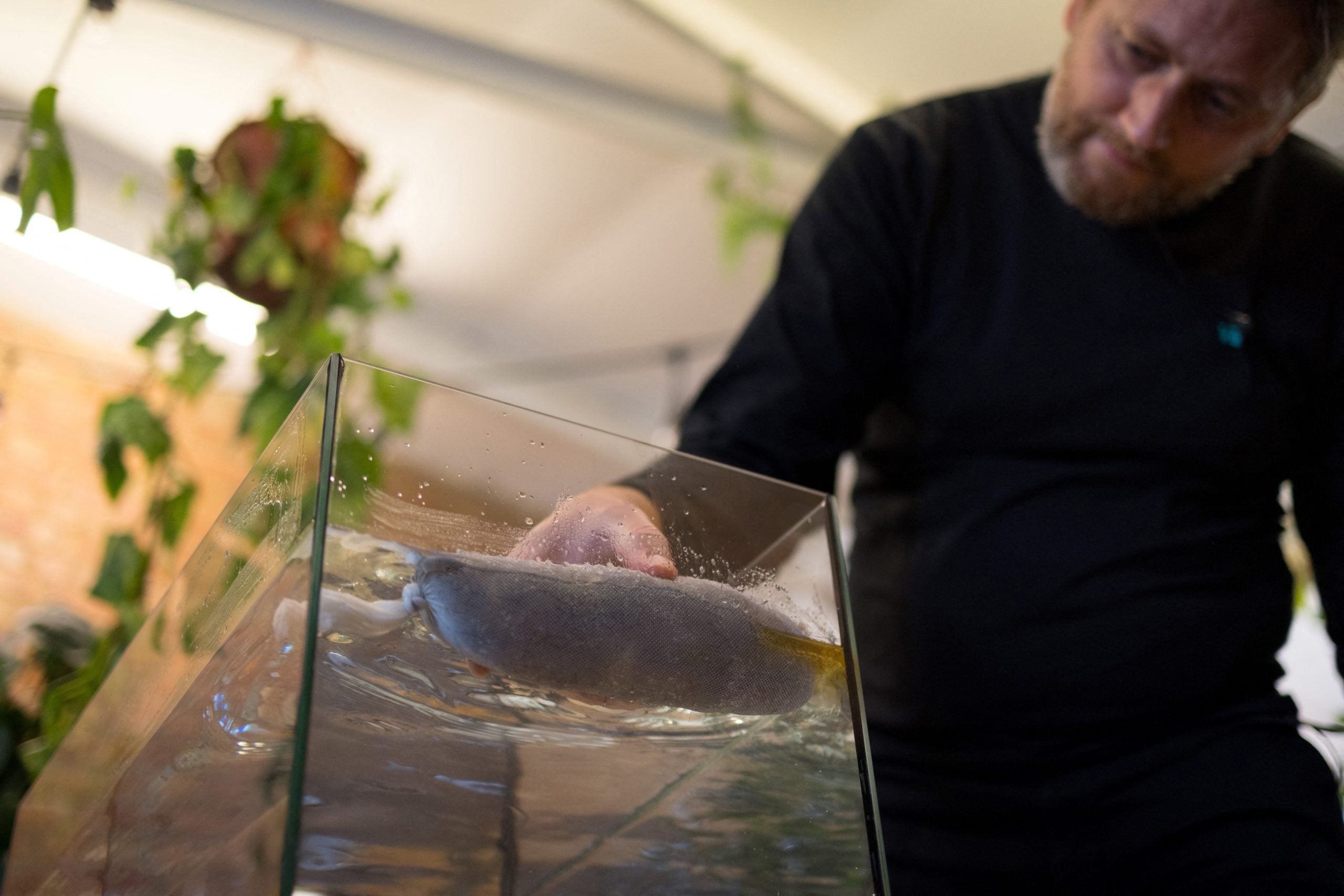 Co-founder of Green Salon Collective, Fry Taylor demonstrates the use of a boom made with hair collected from hairdressers to clean oil spills, at a hair salon in east London on June 28, 2021. – A collective of environmentalists is encouraging hairdressers across the UK to recycle hair to clean up oil spills, make compost or generate energy. (Photo by Tolga Akmen / AFP)

LONDON — Hairdressers across Britain are being urged to do their bit for the environment by recycling snipped-off hair to help clean up oil spills, make compost or generate energy.

At an east London salon, Fry Taylor, one of the founders of the Green Salon Collective, demonstrates spare hair being used in depolluting filters.

He shows how a cotton net stuffed with hair, swept across the surface of a tank of water contaminated with motor oil, instantly cleans up the pollutant.

“The hair just naturally will absorb the oil and hold on to the oil, that’s the important factor,” Taylor, a former hairdresser, told AFP.

A kilo of hair can absorb up to eight liters (two gallons) of oil, according to experts.

The idea of using hair filters originated in the United States and has already been tested in real disasters, such as when a Japanese tanker sank off the coast of Mauritius a year ago.

Britain was lagging behind in recycling unwanted hair when the collective formed last summer, according to Taylor.

“There are, in other countries around the world, recycling systems for hairdressing salons,” he said.

“In the UK and Ireland, they just don’t have the infrastructure.

“We’re not going to wait another five or 10 years for governments and councils to have these systems in place, let’s just do it ourselves,” he added.

The waste produced by the hairdressing industry in the UK each year could fill 50 football stadiums, the collective said.

Most rubbish, including aluminum foil, colored tubes and 99 percent of cut hair, is sent to a landfill site, it added.

Another big problem is chemical waste such as dyes and bleaches.

“There are currently approximately 30,000 salons and another 100,000 freelancers” who are pouring hydrogen peroxide and ammonia into water systems, Taylor said.

The collective is encouraging salons to save these products in a small bin, which it then collects and sends to a facility to produce electricity.

Hairstylist Adam Reed, who owns a salon in London’s trendy Spitalfields neighborhood, is a recent convert to the recycling mission and proudly explains his system to customers.

Saying he was “blown away” by what the Green Salon Collective had taught him, the internationally-renowned hairdresser added he “didn’t quite realize the enormity of it” beforehand.

“It made me realize that sustainability in salons is something that had been missing and it’s really easy to bring into the salon,” he said.

“We have our bins, all labeled, so it’s easy to navigate.”

Hair, protective equipment, metals, papers, and plastics each have their own bin.

Reed charges clients a “green tax” of one or two pounds, and has so far received a “very positive response.”

Composting is another green use of hair, whose rich nitrogen content makes it an ideal fertilizer supplement.

Collective member Ryan Crawford, the owner of a salon in the town of Milton Keynes, northwest of London, has experimented with hair on his vegetables in the garden.

On a sunny July day, he showed AFP two young cabbage shoots: one, surrounded by hair, is intact; the other, planted without hair, is skeletal and gnawed.

“It’s like a protective barrier around the base of the new seedlings,” he said.

“It’s definitely worked keeping things like slugs or snails off,” he added, saying that putting hair directly into the soil also helps retain moisture and acts as “a super-food for the earth,” replenishing nitrogen levels.

Over the last year, around 600 salons in the UK and Ireland have joined the collective, which has amassed around 500 kilos of hair.

It has been used to clean up waterways, an oil spill in Northern Ireland in May, and for composting.

The collective has also gathered 3.5 tons of metal, which is being recycled.

It now hopes to export the model on a large scale across Europe.